Sahuaro Ranch was founded in 1886, by William Henry Bartlett, a native of Illinois. The ranch, located north of what eventually became the city of Glendale, Arizona, was rich in figs and other fruit orchards, vineyards, and fields of alfalfa. The ranch has all of its historical structures restored, and the "Sahuaro Ranch Park" is administered by the Parks and Recreation Department of Glendale.

On March 7, 1980 Sahuaro Ranch was listed in the National Register of Historical Places.

William Henry Bartlett and his brother were wealthy businessmen from Peoria, Illinois who homesteaded lands in what was to become the future the City of Glendale founded by William John Murphy. What made an investment attractive was the completion of the Arizona Canal in 1885. The canal allowed 100,000 acres (40468.564 hec or 40468 hec (hectare) and 5642.2 m2) of desert land to be opened up to homesteading and irrigation farming. The Homestead Act was a United States federal law that gave an applicant ownership at no cost of farmland called a "homestead." 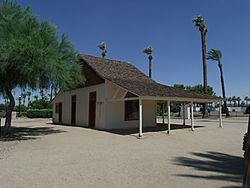 The Bartletts' felt this was a great opportunity to invest in fruit ranching and farming. The brothers were owners of a grain brokerage business, and were amongst the largest traders in the Midwestern farm belt.

By 1891, William Bartlett had under his control 2,000 acres (809.371 hectares or 809 hec and 3712.8 m2) of farmland near Glendale. He established a 640-acre farm (25932.255 hec or 25932 hec and 2559.5 m2) and named it named Sahuaro Ranch. There he planted large citrus and pecan orchards. Even though he never lived permanently at Sahuaro Ranch, Bartlett took an active role in its development and had various buildings and residences built for the people who worked there and for his family. He hired superintendents to manage his ranch operations. 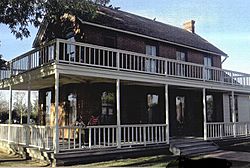 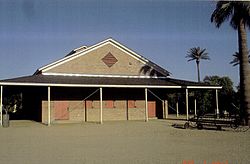 Other structures which were built on the ranch in the 1890s were the Foreman's House, the blacksmith shop and the horse barn. The Fruit Packing House, the largest packing house in the Salt River Valley, was built in 1891.

The Guest House was built in 1898. When Bartlett's youngest son was stricken with tuberculosis while living in Chicago, his doctor recommended that he move to a warmer climate. Bartlett had the guest house building designed to accommodate the needs and comforts of his son and family.

In 1901, Bartlett had a pump house built for an oil-fired electrical generator. The pump house provided electricity to his ranch buildings with the help of a pump water. By 1905, the first automobiles were used in the ranch and Bartlett had a garage built to store his wagons and autos. 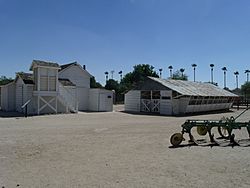 In 1913, Peter E. Bradshaw purchased the ranch, and planted long-staple cotton in 1915.

In 1928, Smith built a dairy barn and raised dairy cows commercially. The milk from the cows was sold in bulk and shipped to local dairies in cans.

Richard W. Smith died in 1944. His son, Richard S. Smith, inherited the farm and established a retail dairy on the ranch, known as the Sahuaro Jersey Dairy Milk House.

On March 7, 1980, Sahuaro Ranch was registered on the National Register of Historic Places after the city applied for the registration of 17 acres of the ranch. The ranch is open to the public and is located at 9802 North 59th Avenue and Mountain View.

On Monday, September 25, 2017 the blacksmith shop, built prior to 1927, and the granary building, built prior to 1927 and addition 1935 burned to the ground and days before that the milk house 1932 burned to the ground at historic Sahuaro Ranch. This is a terrible loss of important historical assets for the community. The park was closed on September 26, 2017 to allow for an investigation of the fires. The park has open up on September 27, 2017. The Glendale Arizona Historical Society stands ready to help and assist the City of Glendale in the investigation, rebuilding and remembrance of these historical resources. 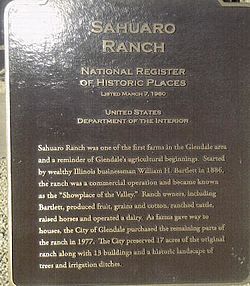 Images of the 19th Century interior furnishings and decorations of the Main Mansion and Adobe house.

All content from Kiddle encyclopedia articles (including the article images and facts) can be freely used under Attribution-ShareAlike license, unless stated otherwise. Cite this article:
Sahuaro Ranch Facts for Kids. Kiddle Encyclopedia.