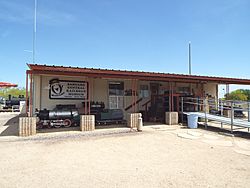 In 1989, the Sahuaro Central Railroad Heritage Preservation Society leased an 80-acre parcel of land, from the Maricopa Parks and Recreation Department. The Adobe Mountain Desert Railroad Park and Museum were then created. The agreement required a no-fee lease for a period of twenty-five years with an option of an additional twenty-five years.

In 1992, the Arizona Model Railroading Society/Arizona Garden Railway Society (AMRS), which were originally established in 1984, were told to vacate the Scottsdale property where at the time they were located. The AMRS believed that the Adobe Mountain Park seemed like the a good area for them to relocate. They presented a request to the Sahuaro Central in that nature. Later that year an agreement was reached between the AMRS and Sahuaro Central. 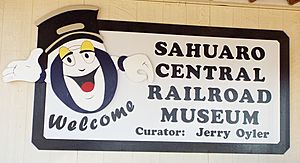 The building which houses the Sahuaro Central headquarters and Sahuaro Central Railroad Museum was once the Park Ranger Station at Adobe Mountain Park. The museum has various exhibits, some which are on loan by the members of the society. These artifacts include train models of different scales, artifacts related to the early years of railroading in Arizona, such as a conductors cap, railroad spikes and lanterns, the bell and headlight of a Porter 0-4-0 18" gauge locomotive and a gift shop. Expansion of the former Ranger Station have been made for meetings and museum operations.

Outside of the museum building there are various steam locomotives on exhibit. One of them is a Porter 0-4-0 is an 18" gauge locomotive that was once used as a copper mining locomotive. Built in Pittsburgh, Pennsylvania in 1887, this locomotive was operated by the Detroit Copper Company at their Morenci, Arizona mine. Another one is a restored mini H.J. Ottaway steam engine built in Wichita, Kansas. Also, on the grounds are four Japanese Internment Camp houses from Leupp, Flagstaff. These houses were built in 1943. 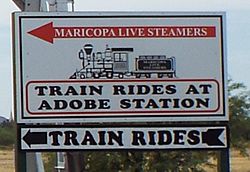 Sign leading to the free rides in Adobe Station

The Maricopa Live Steamers organization is the oldest of its kind in Arizona. They currently run three 7 1/2" gauge train engines. From 1996 through 1999, the MLS created three miles of track which was placed outside the Sahuaro Central. A loop of the track was built around the museum in 1998 and there are now more than 14 miles of tracks. The MLS provides free train rides on Sundays during the months of September through May. The train rides begin in Adobe Station and run through the rugged desert. Among the layouts there are working block signals, a tunnel and many trestles. The MLS's Arizona Western Railroad is the largest miniature railroad setup of its kind in the United States. The MLS also created an old 1890 western themed town with false fronts on their storage units.

The following photographs are of The Sahuaro Central Railroad Museum, the Arizona Model Railroading Society (AMRS) and the Maricopa Live Steamers (MLS) 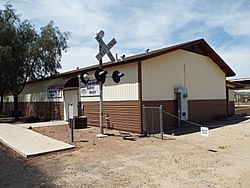 All content from Kiddle encyclopedia articles (including the article images and facts) can be freely used under Attribution-ShareAlike license, unless stated otherwise. Cite this article:
Adobe Mountain Desert Park Facts for Kids. Kiddle Encyclopedia.