List of historic properties in Glendale, Arizona facts for kids

This is a list of historic properties in Glendale, Arizona, which includes a photographic gallery, of some of the city's remaining historic structures and monuments.

The town of Glendale, was founded by William John Murphy in 1892. The establishment of a Santa Fe railroad link to Phoenix in 1895 allowed Glendale to blossom into the largest town in the northwest Salt River Valley. The city was incorporated as a town in 1910 and is currently the 4th largest city in Arizona.

Additionally, a number of properties which are considered historical by the Glendale Historic Society and the Glendale List of Historic Places Survey are listed here with a brief description and image.

Also included in this list are the images of the airfield control tower (which has been restored), barracks, and one large airplane hangar of what once was Thunderbird 1 Army Air Field. The airfield, where the Thunderbird School of Global Management is currently located, was a military airfield in Glendale that was used for contract primary flight training of Allied pilots during World War II.

This was an abandoned 19th century farmhouse and barn located in the middle of 63rd Ave. between Northern and Olive Avenues. The property was demolished in 2017.

The Russian Spiritual Christians Cemetery, sometimes referred to as the Molokan Cemetery, was established in 1911 shortly after the Molokan’s, arrived to buy farmlands in Glendale, Arizona. The Molokans, known as the Spiritual Christians, was a religious group which broke away from the Russian Orthodox Church because they believed that the Russian Government was going to force their youth to serve in the military. This was against their believes. They arrived and established a community in California. Some of these families, among them the Tomachoffs and the Popoffs moved to Glendale, and established a Russian Village. One of the factors which benefited them was the sugar beet factory of that town. The Sugar Beet Factory closed in 1913 and the demand for their agricultural products declined, that and the climate of the area convinced many families to return to California. The cemetery is considered to be a historical site.

The historic Tolmachoff Farms in Glendale was established in 1912 by the Tolmachoff family, who were among the early Russian families who immigrated and settled in Glendale, Arizona. The farm is located at 5726 N. 75th Avenue in Glendale. 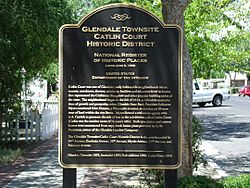 All content from Kiddle encyclopedia articles (including the article images and facts) can be freely used under Attribution-ShareAlike license, unless stated otherwise. Cite this article:
List of historic properties in Glendale, Arizona Facts for Kids. Kiddle Encyclopedia.