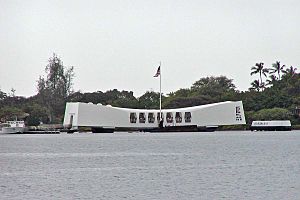 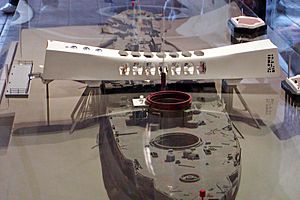 The USS Arizona Memorial is in Pearl Harbor, Hawaii. It is to remember the sailors killed when Pearl Harbor was attacked on December 7, 1941 by the Japanese. During the attack 1,177 sailors were killed on the USS Arizona. The memorial is located on top of the sunken USS Arizona. People can walk over the ship to look at it.

All content from Kiddle encyclopedia articles (including the article images and facts) can be freely used under Attribution-ShareAlike license, unless stated otherwise. Cite this article:
USS Arizona Memorial Facts for Kids. Kiddle Encyclopedia.