Maricopa is a city in the Gila River Valley in the State of Arizona. With an estimated 48,602 residents as of 2015[update], Maricopa is the second most populous incorporated city in Pinal County and eighteenth most populous in Arizona. Maricopa forms part of the Phoenix metropolitan area.

Maricopa has had three locations over the years: Maricopa Wells, Maricopaville and Maricopa Junction; the latter gradually became known as Maricopa. It started as an oasis around a series of watering holes eight miles north of present-day Maricopa, and about a mile west of Pima Butte. European-American traders and travelers called it Maricopa Wells. Several of Arizona’s rivers, the Gila, Santa Cruz, Vekol and Santa Rosa provided this oasis in the desert with an ample supply of water during this period of time.

During the late 1800s, Maricopa Wells was one of the most important relay stations along the San Antonio-San Diego Mail Line and the later more famous Butterfield Overland Mail Route. Although little remains of this once bustling community, it played an important part in the progress and development of the Southwest. It was one of the best-known spots in Arizona during this period of time because it had a reliable source of water, and offered an abundant supply of food. The peaceful Pima and Maricopa farmers who lived and farmed nearby sold supplies to travelers and migrants.

The most prosperous period of time for Maricopa Wells was in the 1870s. During this time the trading center at the Wells provided water and food for not only the east-west travelers, but those who traveled to the north to Phoenix. Fairly good roads had been built by James A. Moore, the proprietor at Maricopa Wells, to all points north, and the Wells was a constant hubbub of activity.

Maricopaville developed south and west of the Wells, following construction of a railroad line from this terminus to Phoenix. In 1879, the Southern Pacific Railroad was in the process of building a railroad line from Yuma to Tucson, and a second railroad line was to be built from Maricopaville, wrapping around the western edge of South Mountain into Phoenix. With the railroad, Maricopaville took on the appearance of a gold rush California boom town, as men worked day and night building hotels, saloons, warehouses, restaurants, theaters, etc. One newspaper of the time reckoned that with its thousands of people and good location, Maricopaville would be an ideal choice for the location of the state capital.

But the railroad never built the anticipated line from Maricopaville into Phoenix. Tempe also wanted to be on the railroad line and lobbied the territorial government to gain a stop. Officials agreed. The settlement known as Maricopaville was essentially rebuilt three miles to the east (to the present location of Maricopa) in the early 1880s, in order to accommodate the Maricopa & Phoenix line, planned to go through Kyrene and Tempe to the north on the way to Phoenix. The first train departed from Maricopa for Phoenix on July 4, 1887. All east-west rail travelers had to stop at Maricopa, and those who wanted to go north had to shift to the M & P Railroad.

A part of the city is within the boundaries of the Ak-Chin Indian Community. The small, federally recognized tribe has developed Harrah's Ak-Chin Casino and related resort, a multi-entertainment cinema complex, and operates a golf course; all are open to the public and draw attendees from Maricopa as well as the greater Phoenix area. In addition the tribe operates the Ak-Chin Regional Airport and an industrial park. A 2011 study said that its casino and resort made up a large part of the economy of Pinal County, in terms of number of jobs and revenue generated.

According to the United States Census Bureau, the city has a total area of 31.9 square miles (83 km2), all of it land.

The topography in Maricopa is flat with several mountain ranges 10 to 20 miles away. The elevation of Maricopa is 1190 feet.

There were 14,359 households out of which 47.1% had children under the age of 18 living with them, 37.5% were married couples living together, 10.9% had a female householder with no husband present, and 22.6% were non-families. 15.6% of all households were made up of individuals and 2.5% had someone living alone who was 65 years of age or older. The average household size was 3.03 and the average family size was 3.38. 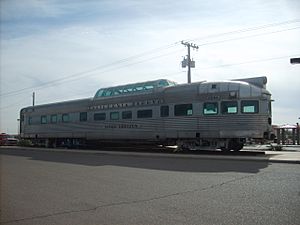 Maricopa is currently the closest stop from Phoenix on Amtrak's Sunset Limited and Texas Eagle trains. The Maricopa depot opened in 2001, originally in a converted passenger rail car but now in a metal building.

All content from Kiddle encyclopedia articles (including the article images and facts) can be freely used under Attribution-ShareAlike license, unless stated otherwise. Cite this article:
Maricopa, Arizona Facts for Kids. Kiddle Encyclopedia.