The Ak Chin Indian Community of the Maricopa (Ak-Chin) Indian Reservation is a federally recognized tribe and Native American community located in the Santa Cruz Valley in Pinal County, Arizona, 37 miles south of Phoenix and near the City of Maricopa. The Community is composed mainly of Akimel Oʼodham and Tohono Oʼodham, as well as some ethnic Hia-Ced Oʼodham members.

The Maricopa Reservation was established by the federal government in 1912, under President William Howard Taft; within a few months his administration reduced it by more than half, due to opposition from non-Native farmers in the area. Gaining federal recognition in 1961, the tribe has established a large agricultural operation, aided by gaining water rights to the Colorado River in a 1984 federal settlement. This settlement enabled it to continue using irrigation to support its agriculture and other needs.

The Community opened a gaming casino in 1994, Harrah's Ak-Chin Casino, with related hotel facilities. In 2011 the casino and resort was the major contributor to the economy of Pinal County. In July 2011, the casino underwent a $20 million expansion, with addition of a new 152-room hotel tower that doubled its capacity. The resort now has 300 rooms, and an outdoor swimming pool, completed in 2012.

On July 1, 2010, the Ak-Chin Indian Community purchased the Royal Dunes golf course and renamed it as the Ak-Chin Southern Dunes Golf Club.

The Maricopa Reservation was established by the federal government in 1912, under President William Howard Taft, at 47,600 acres (193 km2) in size. Within months the administration submitted to opposition from farmers and other non-Natives and reduced the reservation to 22,000 acres (89 km2). The reservation is located in Pinal County within the Sonoran Desert, about 40 miles south of Phoenix and next to Maricopa.

As of January 2019, the current population of the Ak-Chin Indian Community is over 1500 members. 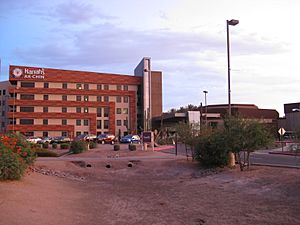 The Ak-Chin Indian Community has its own written form of the O'odham language. It is in the Piman group of the Uto-Aztecan language family. The name Ak-Chin is itself an O'odham word that means the "mouth of the arroyo."

Ak-Chin Farms Enterprises is the Community's agricultural business. It controls 15,000 acres, making it one of the largest agricultural communities in the country. It has long used irrigation to support this enterprise. In 1984 the tribe gained a federal settlement for water rights, being entitled to 75,000 acre-feet of Colorado River water. The farms raise mostly cotton, barley, wheat and milo.

The tribe also owns and operates Harrah's Ak-Chin Casino, which opened in 1994, and related resort facilities: Agave's Southwestern Restaurant, Copper Cactus Grill, Harvest Buffet, the Range restaurant, and hotel, all located in Maricopa. The tribe owns the naming rights for the Ak-Chin Pavilion, a venue in Phoenix designed for various entertainment acts. The casino and resort draw customers from Maricopa and nearby county population, as well as from the large Phoenix metropolitan area.

According to a study conducted in 2011, "Harrah's Ak-Chin Casino Resort is the largest contributor to the Pinal County economy, accounting for nearly 1,100 jobs and generating more than $205.3 million in economic activity in 2010." Expansion of the resort by addition of a large hotel tower has generated higher revenues since then.

Revenues from the casino and resort have enabled the tribe to invest in other development. In 2006 it purchased the 450-acre former Phoenix Regional Airport property, renamed in 2012 as Ak-Chin Regional Airport. It is being improved. Nearby the tribe acquired the 50-acre Santa Cruz Commerce Center industrial park, which is being developed under leases. The tribe has set up the Ak-Chin Industrial Park Board to make leases and monitor development there. The tribe applied to the BIA to have both properties taken into trust on its behalf. It continues to work with local communities on development nearby.

In 2010 the tribe purchased the Southern Dunes Golf Club, which is open to the public for fees. The tribe makes it available as an amenity to guests at Harrah's Ak-Chin Casino Resort.

In November 2012, the tribe opened the $50 million, 165,000-square foot Ak-Chin entertainment complex, with a multi-theater cinema, bowling alley, restaurants, arcade and areas for staging events. It is located at the edge of the reservation next to the city of Maricopa. Mayor Christian Price said he thought the project would be "a great addition to the area" and that the city and tribe could encourage other development in the area.

From its strong gaming and resort revenues, the tribe has made several improvements within the reservation, including the construction of a new fire station, water reclamation facility, and surface water treatment plant.

All content from Kiddle encyclopedia articles (including the article images and facts) can be freely used under Attribution-ShareAlike license, unless stated otherwise. Cite this article:
Ak-Chin Indian Community Facts for Kids. Kiddle Encyclopedia.