New River is an unincorporated community and a census-designated place (CDP) in Maricopa County, Arizona. The population was 14,952 at the 2010 census.

New River is named after the seasonal wash of the same name, part of the Agua Fria River system which drains into the Salt River. It was founded by Lord Darrell Duppa in 1868 as a stagecoach stop. For many years it was the terminus of the old Black Canyon Highway (now Interstate 17). The pavement ended in New River and continued as a dirt road to the city of Prescott.

There were 3,921 households, out of which 35.3% had children under the age of 18 living with them, 68.9% were married couples living together, 5.6% had a female householder with no husband present, and 21.8% were non-families. 15.3% of all households were made up of individuals, and 2.9% had someone living alone who was 65 years of age or older. The average household size was 2.73 and the average family size was 3.04.

Pictured are some of the few remaining historic structures of New River. 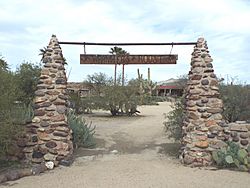 The entrance of the historic Wranglers Roost Stagecoach Stop .

All content from Kiddle encyclopedia articles (including the article images and facts) can be freely used under Attribution-ShareAlike license, unless stated otherwise. Cite this article:
New River, Arizona Facts for Kids. Kiddle Encyclopedia.