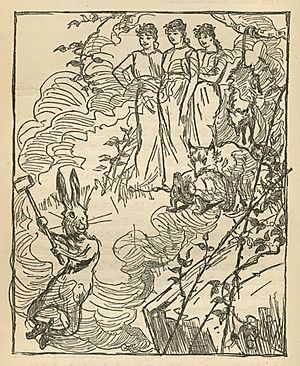 Br'er Rabbit's dream, from Uncle Remus, His Songs and His Sayings: The Folk-Lore of the Old Plantation, 1881.

Br'er Rabbit (also spelled Bre'r Rabbit or Brer Rabbit or Bruh Rabbit, with the title "Br'er") is an important character in the Uncle Remus stories in the Southern United States. He is a tricky character, and usually wins or escapes because he is clever, not because he is strong.

Br'er Rabbit came from both African and Cherokee cultures. Disney later used the character for their The Song of the South.

In a Cherokee story, "the fox and the wolf throw the trickster rabbit into a thicket from which the rabbit quickly escapes." There was a "melding (mixing) of the Cherokee rabbit-trickster ... into the culture of African slaves." "In fact, most of the Br'er Rabbit stories originated in (came from) Cherokee myths."

All content from Kiddle encyclopedia articles (including the article images and facts) can be freely used under Attribution-ShareAlike license, unless stated otherwise. Cite this article:
Br'er Rabbit Facts for Kids. Kiddle Encyclopedia.