Uncle Remus is the fictional title character and narrator of a collection of African American folktales compiled and adapted by Joel Chandler Harris and published in book form in 1881. Harris was a journalist in post-Reconstruction Atlanta, and he produced seven Uncle Remus books. He wrote these stories to represent the struggle in the Southern United States, and more specifically in the plantations. He did so by introducing tales that he had heard and framing them in the plantation context. He wrote his stories in a dialect which was his interpretation of Deep South Negro language of the time. For these framing and stylistic choices, his collection has encountered controversy.

"Old Plantation Play Song", from Uncle Remus, His Songs and His Sayings: The Folk-Lore of the Old Plantation, 1881

Uncle Remus is a collection of animal stories, songs, and oral folklore collected from southern black Americans. Many of the stories are didactic, much like those of Aesop's Fables and Jean de La Fontaine's stories. Uncle Remus is a kindly old freedman who serves as a story-telling device, passing on the folktales like the traditional African griot to children gathered around him.

The stories are written in an eye dialect devised by Harris to represent a Deep South Black dialect. Uncle Remus is a compilation of Br'er Rabbit storytellers whom Harris had encountered during his time at the Turnwold Plantation. Harris said that the use of the Black dialect was an effort to add to the effect of the stories and to allow the stories to retain their authenticity. The genre of stories is the trickster tale. At the time of Harris's publication, his work was praised for its ability to capture plantation Black dialect.

Br'er Rabbit ("Brother Rabbit") is the main character of the stories, a character prone to tricks and troublemaking who is often opposed by Br'er Fox and Br'er Bear. In one tale, Br'er Fox constructs a doll out of a lump of tar and puts clothing on it. When Br'er Rabbit comes along, he addresses the "tar baby" amiably but receives no response. Br'er Rabbit becomes offended by what he perceives as the tar baby's lack of manners, punches it and kicks it, and becomes stuck.

Adaptations in film and other media 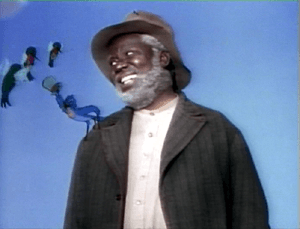 An Uncle Remus and His Tales of Br'er Rabbit newspaper Sundays-only strip (King Features Syndicate) ran from October 14, 1945, through December 31, 1972, as an offshoot of the Disney comics strip Silly Symphony.

The stories have inspired at least three feature films:

Uncle Remus appears heavily as a supporting character in The Residents' rock opera, Not Available, recorded in 1974 and released in 1978. After returning from Easter Island, he provides unhelpful, dismissive advice to the lead character, quoting "Well, strangers have left on longer trains before", in response to his cries for help and understanding.

"Uncle Remus" is a song by Frank Zappa and George Duke from Zappa's 1974 album Apostrophe (').

In Bob Dylan's epic poem "Last Thoughts on Woody Guthrie", the author lists several people that are commonly looked to for hope and inspiration, saying "that stuff ain't real". In one verse of the poem, he says "And Uncle Remus can't tell you and neither can Santa Claus."

All content from Kiddle encyclopedia articles (including the article images and facts) can be freely used under Attribution-ShareAlike license, unless stated otherwise. Cite this article:
Uncle Remus Facts for Kids. Kiddle Encyclopedia.