Bristol Old Vic is a British theatre company based at the Theatre Royal, Bristol. The present company was established in 1946 as an offshoot of the Old Vic in London. It is associated with the Bristol Old Vic Theatre School, which became a financially independent organisation in the 1990s. Bristol Old Vic runs a Young Company for those aged 7–25.

The Theatre Royal, the oldest continually-operating theatre in the English-speaking world, was built between 1764 and 1766 on King Street in Bristol. The Coopers' Hall, built 1743–44, was incorporated as the theatre's foyer during 1970–72. Together, they are designated a Grade I listed building by Historic England. Daniel Day-Lewis called it "the most beautiful theatre in England."

In 2012, the theatre complex completed the first phase of a £19 million refurbishment, increasing the seating capacity and providing up to ten flexible performance spaces. Besides the main Theatre Royal auditorium, the complex includes the Studio theatre and the Side Stage, Paint Shop and Basement performance areas. Whilst the theatre was closed, the company continued to present work in the Studio and Basement spaces, as well as at other sites around Bristol. The Theatre Royal re-opened in 2012 with Wild Oats.

History of the theatre

The theatre is situated on King Street, a few yards from the Floating Harbour. Since 1972, the public entrance has been through the Coopers' Hall, the earliest surviving building on the site. The Coopers' Hall was built in 1744 for the Coopers' Company, the guild of coopers in Bristol, by architect William Halfpenny. It has a "debased Palladian" façade with four Corinthian columns. It only remained in the hands of the Coopers until 1785, subsequently becoming a public assembly room, a wine warehouse, a Baptist chapel and eventually a fruit and vegetable warehouse.

The theatre was built between 1764 and 1766. The design of the auditorium has traditionally been taken to have been based, with some variations, on that of the Theatre Royal, Drury Lane in London. Although Bristol architect Thomas Paty supervised construction, the theatre was built to designs by James Saunders, David Garrick's carpenter at Drury Lane. Saunders had provided drawings for the theatre in Richmond, Surrey, built in 1765. A long section (1790, at Harvard University Theatre Collection) and a survey plan (1842, at the Local Studies Library) of the Richmond theatre show close similarities with the Bristol theatre in the proportions and in the relationship between the actors on stage and the spectators surrounding them on three sides. The site chosen was Rackhay Yard, a roughly rectangular empty site behind a row of medieval houses and to one side of the Coopers' Hall. Two (and possibly three) new passageways built through the ground floor of the houses fronting King Street gave access to Rackhay Yard and the "New Theatre" inside it.

The theatre opened on 30 May 1766 with a performance which including a prologue and epilogue given by David Garrick. As the proprietors were not able to obtain a Royal Licence, productions were announced as "a concert with a specimen of rhetorick" to evade the restrictions imposed on theatres by the Licensing Act 1737. This ruse was soon abandoned, but a production in the neighbouring Coopers' Hall in 1773 did fall foul of this law.

Legal concerns were alleviated when the Royal Letters Patent were eventually granted in 1778, and the theatre became a patent theatre and took up the name "Theatre Royal". At this time the theatre also started opening for the winter season, and a joint company was established to perform at both the Bath Theatre Royal and in Bristol, featuring famous names including Sarah Siddons, whose ghost, according to legend, haunts the Bristol theatre. The auditorium was rebuilt with a new sloping ceiling and gallery in 1800. After the break with Bath in 1819 the theatre was managed by William M'Cready the elder, with little success, but slowly rose again under his widow Sarah M'Cready in the 1850s. Following her death in 1853 the M'Creadys' son-in-law James Chute took over, but he lost interest in the Theatre Royal, which fell into decline when he opened the Prince's Theatre, originally known as the New Theatre Royal, in 1867. A new, narrow entrance was constructed through an adjacent building in 1903.

Formation of the Bristol Old Vic 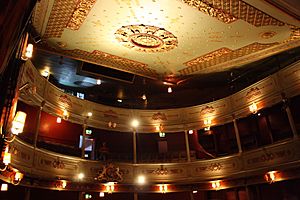 Interior of the main theatre

Chute relinquished his lease on the Theatre Royal in 1861, concentrating his business at the Prince's Theatre, which was destroyed by bombing during the Second World War. In 1942 the lease owners put the building up for sale. The sale was perceived as a possible loss of the building as a theatre and a public appeal was mounted to preserve its use, and as a result a new Trust was established to buy the building. The Council for the Encouragement of Music and the Arts (CEMA) leased the building from the Trust and in 1946 CEMA's successor, the Arts Council, arranged for a company from the London Old Vic to staff it, thus forming the Bristol Old Vic.

An early triumph for the Bristol Old Vic occurred when the 1954 première production of Salad Days transferred to the West End and became the longest-running musical on the London stage at that time. The Arts Council remained involved until 1963 when their role was taken over by the City Council. In the same year the London Old Vic was disbanded and the Bristol company became fully independent. The Bristol Old Vic also put plays on in the council-owned Little Theatre from then until 1980.

The present theatre complex, designed by Peter Moro, was completed in 1972. The 1903 entrance building was demolished, as were a number of surrounding buildings and, more controversially, the stage area of the 1766 theatre. A new stage and fly tower were built along with technical facilities and offices. The 150 seat New Vic Studio (now the Studio) theatre was built in place of the old entrance, and the Coopers' Hall provided the theatre with the grand façade and foyer area it had previously lacked.

Throughout the 1970s and 80s Bristol Old Vic productions were well received both locally and on tour, but by the late 80s faced chronic underfunding. A revival under the leadership of Andrew (Andy) Hay brought an increase in audience numbers; there followed a new Arts Council funding package, and in 2003 the appointment of joint artistic directors David Farr and Simon Reade. They briefly branded the organisation the "new bristol old vic".

In 2005 Reade became the sole artistic director. Artistic highlights during these times included the production of A. C. H. Smith’s Up The Feeder, Down the Mouth and Back Again during Andy Hay’s tenure, and some well-received Shakespeare productions under David Farr and Simon Reade.

In July 2007, the board of trustees took the controversial decision to close the theatre for refurbishment. Many members of the theatre profession feared for the future of the Old Vic. Following several public meetings in the winter of 2007/2008 a newly formed board of trustees appointed Dick Penny, the director of the Watershed Media Centre as executive chairman.

In October 2010 there was a merger of the Old Vic and the Theatre Royal Bristol Trust, into a combined charity to be chaired by Laura Marshall, the managing director of Icon Films. 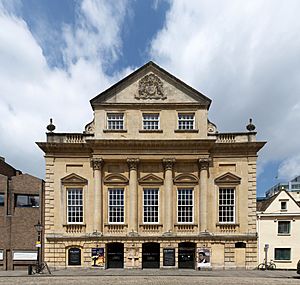 A fundraising campaign for the £19 million planned refurbishment was assisted by appearances from, among others, Richard Briers, Stephanie Cole, Judi Dench, Prunella Scales, Patrick Stewart and Timothy West. £5.3 million was provided by the Arts Council. During the closure the company staged productions in the Studio theatre, the Basement and in other locations around Bristol, including Sally Cookson’s Treasure Island on King Street in summer 2011 and Melly Still’s revival of Coram Boy at the Colston Hall at Christmas 2011.

The plan was for a flexible theatre complex, where up to ten areas are available for performance. Tom Morris has cited as inspiration the Théâtre des Bouffes du Nord in Paris. The main auditorium gained an optional thrust stage, and an increase in seating to 540. The Side Stage area was redeveloped, with additional capacity of 250, creating the option of a separate second auditorium. Other spaces redeveloped as performance areas included the Paint Shop and the rehearsal room. The Theatre Royal re-opened in September 2012, with Wild Oats. Further work (mainly in the area of the foyer) is planned for the refurbishment's next phase, to be completed in 2016, to coincide with the 250th anniversary of the theatre opening.

The Bristol Old Vic has a long history of taking productions on tour both within the United Kingdom and overseas. Notable production toured include Hamlet, Arms and the Man and A Man for all Seasons to Ceylon and Pakistan in 1962–63; Hamlet and Measure for Measure to America, Holland and Belgium in 1966–67 and Man and Superman to the June Schauspielhaus Festival in Zurich, 1958. The company has also made frequent visits to the Edinburgh Festival and productions have toured to the Theatre Royal Bath, Oxford Playhouse, Royal Court Theatre, London and the Young Vic, London amongst others. Co-productions have taken Bristol Old Vic plays to most of Britain's major theatres.

More recently, Bristol Old Vic has co-produced with companies such as Kneehigh Theatre, the Royal National Theatre, West Yorkshire Playhouse and other regional theatres and companies across the UK.

Tom Morris’ production of Swallows and Amazons recently transferred to the Vaudeville Theatre in London’s West End followed by a major UK tour. Simon Godwin’s production of Brian Friel’s Faith Healer is playing in the 2012 Hong Kong Arts Festival. Other recent touring productions include the Bristol Old Vic/Shakespeare at the Tobacco Factory co-production of Uncle Vanya.

The Bristol Old Vic Theatre School, opened by Laurence Olivier in 1946, is an affiliate of the Conservatoire for Dance and Drama, an organisation securing the highest standards of training in the performing arts, and is an associate school of the University of the West of England. The School began life in October 1946, only eight months after the founding of its parent Bristol Old Vic Theatre Company, in a room above a fruit merchant's warehouse in the Rackhay near the stage door of the Theatre Royal. (The yard of the derelict St Nicholas School adjacent to the warehouse was still used by the Company for rehearsals of crowd scenes and stage fights as late as the early 1960s, notably for John Hale's productions of Romeo and Juliet starring the Canadian actor Paul Massie and Annette Crosbie, a former student of the School, and Rostand's Cyrano de Bergerac with Peter Wyngarde. Students from the Theatre School frequently played in these crowd scenes and fights.)

The School continued in these premises until 1954 when royalties from the musical, Salad Days by Julian Slade and Dorothy Reynolds were given to the School towards the purchase and conversion of two large adjoining Victorian villas in Clifton, which remain their base today.

In 1995, that donation was formally recognised when a new custom-built dance and movement studio in the School's back garden was named the Slade/Reynolds Studio. The School provides comprehensive training courses for theatre, radio, film, and television professionals and its graduates are to be found in key positions as actors, directors, set designers, costumer designers, lighting designers and stage and company managers throughout the world.

Among the most notable of the many distinguished actors on the School's list of alumni are the Academy Award winners Daniel Day-Lewis and Jeremy Irons.

To coincide with their re-opening in 2012, the theatre launched an award called the Patron’s Prize, which was later renamed the Peter O’Toole prize following the actors death. The award is a six-month contract at the Bristol Old Vic offered to two graduating actors from the Bristol Old Vic Theatre School. The inaugural winners were Emily May Smith and Isaac Stanmore.

All content from Kiddle encyclopedia articles (including the article images and facts) can be freely used under Attribution-ShareAlike license, unless stated otherwise. Cite this article:
Bristol Old Vic Facts for Kids. Kiddle Encyclopedia.