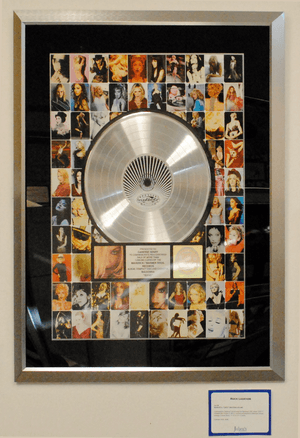 A platinum award for the album GHV2 of Madonna.

In the United States, the Recording Industry Association of America awards certification based on the number of albums and singles sold through retail and other secondary stores.

Currently, the normal RIAA certifications for albums are:

If an album has at least 50% Spanish-language content, the RIAA hands out the following awards,:

For Spanish-language albums that were certified before December 2013:

For Spanish-language albums that are certified after December 2013:

All content from Kiddle encyclopedia articles (including the article images and facts) can be freely used under Attribution-ShareAlike license, unless stated otherwise. Cite this article:
RIAA certification Facts for Kids. Kiddle Encyclopedia.