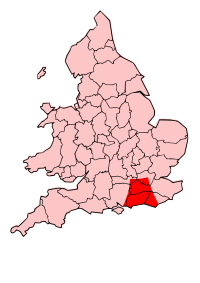 Map of the Territory of the Regnenses

The Regnenses, Regni or Regini were a British Celtic people. They were ruled by a king. Their their territory or kingdom was later a civitas of Roman Britain. Their capital was Noviomagus Reginorum, known today as Chichester in modern West Sussex.

Before the Romans conquered Britain their land and capital appear to have been part of the territory of the Atrebates. Possibly they were part of a confederation of tribes. The tribe made use of hill forts more than other tribes around them. Their location in southern England would have made them a more civilized people. They would have had contact with Europe through trading exposing them to new ideas. 'Regninses', means "people of the kingdom". It is not known how they came by that name. It was recorded by the Romans but it could be a translation or a name the Romans gave them.

Their ruler was Tiberius Claudius Cogidubnus. Tacitus said of him:

The theory that Cogidubnus was created legatus, a rank only ever given to senators, is based on reconstructing the damaged Chichester inscription. It would read as Cogidubni regis legati Augusti in Britannia ("king and imperial legate in Britain"). It could also be Cogidubni regis magni Britanniae ("great king of Britain").

All content from Kiddle encyclopedia articles (including the article images and facts) can be freely used under Attribution-ShareAlike license, unless stated otherwise. Cite this article:
Regnenses Facts for Kids. Kiddle Encyclopedia.