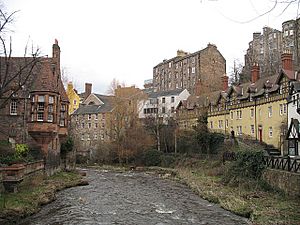 The Water of Leith flowing through Dean Village 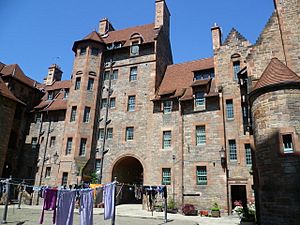 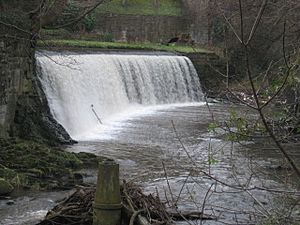 The Great Cauld, a dam below West Mill 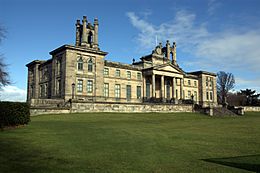 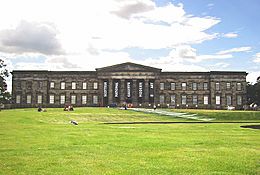 The Scottish National Gallery of Modern Art, built as John Watson's Institution in the Dean 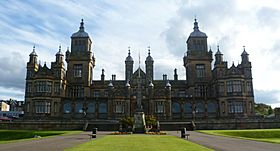 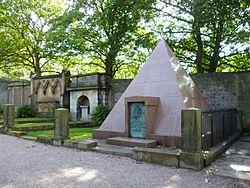 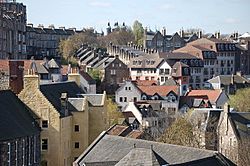 Green with samarae in April, one of the last old Cornish Elms in Britain tops the skyline over Dean Village (2007)

Dean Village (from dene, meaning 'deep valley') is a former village immediately northwest of the city centre of Edinburgh, Scotland. It was known as the "Water of Leith Village" and was the centre of a successful grain milling area for more than 800 years. At one time there were no fewer than eleven working mills there, driven by the strong currents of the Water of Leith.

The mills of Dene were first mentioned in King David I's founding charter of Holyrood Abbey, usually dated c. 1145, in which he granted one of his mills of Dene to the Abbey.

The area remained a separate village until the 19th century. In 1826, John Learmonth, a future Lord Provost of Edinburgh, purchased the Dean Estate from the Nisbets of Dean.

A bridge was needed to access from one side of the high valley to the other (the low-lying village was more or less an irrelevance). The Cramond Road Trustees discarded plans by other engineers and insisted upon the use of Thomas Telford. They also insisted that the bridge be toll-free. This was built 1831-2 and opened in 1833.

The four-arched Dean Bridge, spans a width of over 400 feet and is 106 feet above the water level. It carries the Queensferry Road over the Dean Gorge, and was built at the joint expense of John Learmonth and the Cramond Road Trustees. The contractors were John Gibb & Son, from Aberdeen. The bridge transformed access westwards from the city and opened up the potential to develop the Dean estate The side parapet of the bridge was raised in height in 1912 as a deterrent to suicides, which were very common here in the 19th century, being more or less guaranteed success. The change in stonework is still visible.

In 1847 the Dean Cemetery was created, standing on the site of Dean House. This mansion house was the centre of the Dean Estate which had been bought by Sir William Nisbet in 1609. It was demolished in 1845 to create the cemetery but some sculptured stones are incorporated in the southern retaining wall (visible only from lower level). Seven surviving panels of the painted ceiling (painted between 1605 and 1627) of the great hall of Dean House are now in the National Museum of Scotland. The cemetery which is one of the few in Scotland run as a non-profit making charity trust (to avoid being asset-stripped), is the resting place of many well-known people, including the railway engineer Sir Thomas Bouch and David Octavius Hill.

The area to the south-west is generally termed Belford, being the site of a ford across the river near Bell's Mills.

Due to the development of much larger and more modern flour mills at Leith, Dean Village's trade diminished. For many years, the village became associated with decay and poverty, and it reached a low point by around 1960.

From the mid-1970s onwards it became recognised as a tranquil oasis, very close to the city centre, and redevelopment and restoration began, converting workers' cottages, warehouses and mill buildings. This included development on a cleared former industrial site on the north side of the river.

The area has now become a desirable residential area.

The Water of Leith Walkway running from Balerno to Leith was created through the area in 1983.

Dean Bridge was featured in Ian Rankin's fictional book Strip Jack, in which a woman is found dead in the river underneath the bridge. It also features as a location in the second book of the Peter May Lewis trilogy, The Lewis Man, in which a 1950s schoolboy dare results in a fatality.

All content from Kiddle encyclopedia articles (including the article images and facts) can be freely used under Attribution-ShareAlike license, unless stated otherwise. Cite this article:
Dean Village Facts for Kids. Kiddle Encyclopedia.