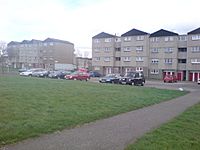 Saughton (/ˈsɔːxtən/) (Sauchton in Scots) is a suburb of the west of Edinburgh, Scotland, bordering on Broomhouse, Stenhouse, Longstone and Carrick Knowe. In Lowland Scots, a "sauch" is a willow. The Water of Leith flows by here.

It is best known for its prison, known officially as "HM Prison Edinburgh", but colloquially as "Saughton Prison", which lies to the south of the district.

The Calder Road, one of the main city arteries, runs through it.

Saughton tram stop is adjacently south of the main Glasgow to Edinburgh railway line, close to the junction of Broomhouse Drive and Saughton Road North.

All content from Kiddle encyclopedia articles (including the article images and facts) can be freely used under Attribution-ShareAlike license, unless stated otherwise. Cite this article:
Saughton Facts for Kids. Kiddle Encyclopedia.