Kids Encyclopedia Facts
This page is about the Scottish village of Braemar. For other uses of Braemar, see Braemar (disambiguation).

Braemar is a village in Aberdeenshire, Scotland, around 58 miles (93 km) west of Aberdeen in the Highlands. It is the closest significantly-sized settlement to the upper course of the River Dee sitting at an elevation of 339 metres (1,112 ft).

The Gaelic Bràigh Mhàrr properly refers to the area of upper Marr (as it literally means), i.e. the area of Marr to the west of Aboyne, the village itself being Castleton of Braemar (Baile a' Chaisteil). The village used to be known as Cinn Drochaid (bridge end); Baile a' Chaisteil referred to only the part of the village on the east bank of the river, the part on the west bank being known as Ach an Droighinn (thorn field).

Braemar is the third coldest low lying place in the UK, after the villages of Dalwhinnie and Leadhills, with an annual average temperature of 6.8 °C. Braemar has twice entered the UK Weather Records with the lowest ever UK temperature of -27.2 °C, on 11 February 1895, and 10 January 1982. Braemar has an average of 102 days of air frost and 153 days with 1 mm or more of rainfall. Snowfall can be heavy in winter and early spring, and often accumulates to depths of 30 cm or more. On 30 September 2015, Braemar had one of the largest recorded diurnal ranges of temperature in the UK. It also recorded the warmest and coldest temperatures for the UK for September 2015 on that day. The maximum temperature was 24.0 °C and the minimum was -1.3 °C. The very next day it was again the coldest and warmest place in the UK. The minimum temperature was -2.0 °C and the maximum was a new record for Braemar - it was 22.7 °C. Braemar recorded -5.0 °C later that month, meaning that for the second month in a row, Braemar recorded the warmest and coldest monthly temperatures for the UK. Also in 2015, temperatures reached a new record for November for Braemar of 17.7 °C set on the 2nd.

Historically the village is situated in the upper end of the historical Earldom of Mar or literally the Braes o' Mar. In Scottish Gaelic, Bràigh Mhàrr (upland of Mar) referred to the general locality rather than the village itself.

The use of Braemar to specifically refer to the village dates to around 1870. Previously, two independent hamlets existed on the banks of the Clunie Water named on the West bank; Auchendryne, on the East bank; Castleton, the name referring to Kindrochit Castle (within the modern-day village) rather than Braemar Castle (immediately south of the village). The names Auchendryne and Castleton are clearly marked on the current Ordnance Survey maps below the larger and bolder Braemar. 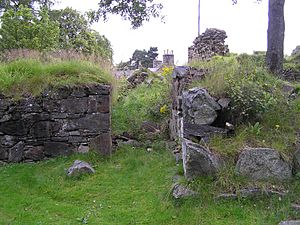 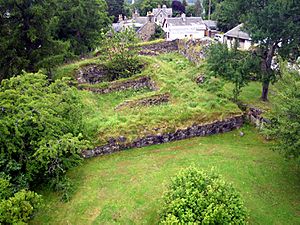 Pole aerial photo of the ruins of The Royal Castle of Kindrochit in Mar.

Traditionally, Malcolm III with his first Queen came to the area in around 1059, and according to legend held a great gathering at the original settlement of Doldencha, situated under the present-day graveyard. He is also credited with having built a timber bridge across the Clunie and the original Kindrochit Castle, the siting of which was derived from a strategic relation to the crossings of the Grampian Mounth. The ruins of Kindrochit Castle on the east bank of the Clunie Water, slightly upriver from the bridge in Braemar, are considered to be largely of 14th-century origin replacing the presumed timber-construction of the original castle. The name Kindrochit (bridge end) is the source of the name Castleton being Bail Chasteil.

On 6 September 1715, John Erskine, Earl of Mar raised the Jacobite standard at Braemar, instigating the 1715 rising against the Hanoverian Succession.

In 1795, a Roman Catholic chapel was built on the high-ground to the west of Auchendryne giving the name to Chapel Brae which, according to Wyness, was being used as a school.

Into the 20th century, the village was almost completely owned and divided by the adjoining estates of Mar: Auchendryne and Invercauld on one side; and Castleton on the other. To some extent the inter-estate rivalry led to the building of the Fife Arms Hotel in Auchendryne, and the Invercauld Arms Hotel in Castleton. Interestingly, the Invercauld Arms was built over the mound where John "Bobbing John" Erskine, 6th Earl of Mar raised the Jacobite standard in 1715.

Auchindryne (to use the spelling by Wyness) from ach' an droighinn (field of the thorn) belonged to a branch of the Farquharsons until it was forfeited in the aftermath of the Jacobite rising of 1745. Later that century it was acquired by William Duff, 1st Earl Fife.

Catholicism has traditionally been strong in the Braemar area, and the bones of Saint Andrew rested in Braemar before being taken to the place now known as St. Andrews. The Catholic Church in Braemar is dedicated to Saint Andrew was built in 1839.

Johann von Lamont (1805-1879), the famous Scottish-German astronomer and astrophysicist who pioneered the study of the Earth's magnetic field was born in nearby Corriemulzie.

In the 1891 census, 59.2% of the population of Braemar spoke the Gaelic language "habitually", the percentage of those actually able to speak the language (despite not having much opportunity to) would have been somewhat higher. The small crofting township of Inverey (Inbhir Èidh) was 86.3% Gaelic-speaking, most non-speakers being originally from Lower Deeside. The Gaelic spoken in the Aberdeenshire Highlands shared most features in common with the Gaelic of Strathspey and East Perthshire. The last native-speaker of the local Gaelic dialect died in 1984, though there are still surviving native-speakers of the similar Strathspey dialect. At the 2001 census, out of a total population of 839 in Crathie and Braemar Civil Parish, only 5 (0.6%) claimed to be Gaelic speakers.

Known colloquially as The Games and originating from those believed to have been held by Malcolm III, an annual Highland Games Gathering is held at Braemar on the first Saturday in September and is traditionally attended by the British Royal Family.

In 1746, the Act of Proscription stopped all clan gatherings, but following its repeal in 1782, the old enthusiasms for such events returned. About 1826, the Braemar Highland Society was created; the first modern-day games taking place in 1832. On 14 September 1844 Queen Victoria attended the gathering at Invercauld. In 1866, Royal was added to Braemar Highland Society and in 1906, the Duke of Fife presented 12 acres (49,000 m2) of Mar Estate to the Society and The Princess Royal and Duke of Fife Memorial Park, the current home of the Braemar Gathering, was created.

Since Queen Victoria's time, the reigning monarch has been the patron of the Braemar Royal Highland Society.

This gallery shows general views of the 2006 Braemar Gathering 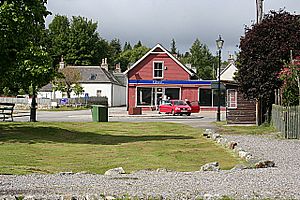 Braemar has a golf course, two large hotels (Fife Arms and Invercauld Arms) as well as many smaller hotels and private homes offering bed and breakfast style accommodation and a large SYHA hostel. On the southern edge of the village there is also a caravan site. A tourist information centre is opposite the Fife Arms Hotel. Braemar also has a small Post Office/village shop and mountain bike hire. 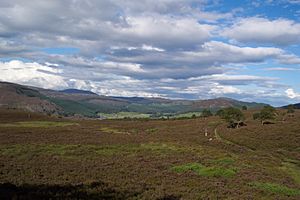 The Morrone Birkwood Nature Reserve is a nature reserve on the edge of the village reached from the car park at the top of Chapel Brae.

There is a regular bus service between Braemar and Aberdeen.

All content from Kiddle encyclopedia articles (including the article images and facts) can be freely used under Attribution-ShareAlike license, unless stated otherwise. Cite this article:
Braemar Facts for Kids. Kiddle Encyclopedia.