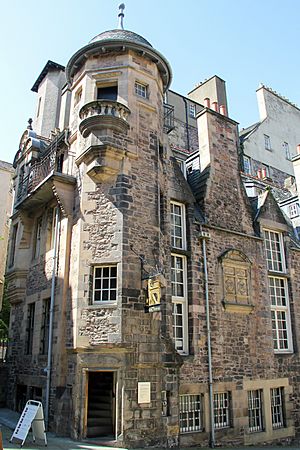 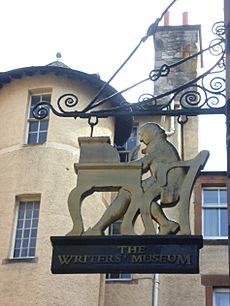 The Writers’ Museum, housed in Lady Stair's House at the Lawnmarket, on the Royal Mile in Edinburgh, presents the lives of three of the foremost Scottish writers: Robert Burns, Walter Scott and Robert Louis Stevenson.

Run by the City of Edinburgh Council, the collection includes portraits, works and personal objects.

Beside the museum lies the Makars' Court, the country's emerging national literary monument.

The current building is a clever faux-medieval masterpiece by Stewart Henbest Capper dating from 1892. It was presented by the Earl of Roseberry (who probably commissioned the work) to the city for use as a museum in 1907. Only then did it acquire the name of "Lady Stairs House".

It incorporates replicas (not originals) of various carved stones probably from the earlier building. The house it replaced was demolished in 1890.

Lady Stair's House (3 Lady Stair's Close, 477 Lawnmarket) is located within Lady Stair's Close, just off the Lawnmarket. The original house was built in 1622 for Sir William Gray of Pittendrum. The lintel over the entrance is dated 1622 and carries the initials WG and GS, for William Gray and Geida (or Egidia) Smith, his wife (sister of Provost John Smith of Grothill), and the inscription "FEARE THE LORD AND DEPART FROM EVILL". Their son was the Scots Worthy Andrew Gray whose books became well-known despite dying at an early age. The building was initially known as Lady Gray's House and the close known as Lady Gray's Close.

The tenement is now named after the Gray's granddaughter: the society beauty Lady Stair, Elizabeth, Dowager Countess of Stair (née Elizabeth Dundas), the widow of John Dalrymple, 1st Earl of Stair. She purchased the building in 1719.

In 1907, the Earl gave the house to the royal burgh of Edinburgh, for use as a municipal museum.

All content from Kiddle encyclopedia articles (including the article images and facts) can be freely used under Attribution-ShareAlike license, unless stated otherwise. Cite this article:
Writers' Museum Facts for Kids. Kiddle Encyclopedia.