Kids Encyclopedia Facts
Not to be confused with Scott Statue. 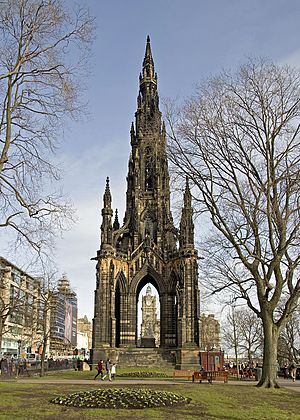 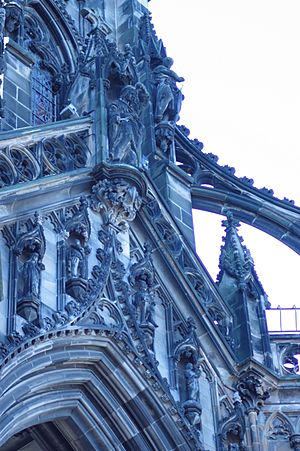 The Scott Monument is a Victorian Gothic monument to Scottish author Sir Walter Scott. It is the second largest monument to a writer in the world after the José Martí monument in Havana. It stands in Princes Street Gardens in Edinburgh, opposite the Jenners department store on Princes Street and near to Edinburgh Waverley Railway Station, which is named after Scott's Waverley novels.

The tower is 200 feet 6 inches (61.11 m) high and has viewing platforms reached by a series of spiral staircases giving panoramic views of central Edinburgh and its surroundings. The highest platform is reached by a total of 287 steps. It is built from Binny sandstone quarried near Ecclesmachan in West Lothian.

It is placed on axis with South St. David Street, the main street leading off St. Andrew Square to Princes Street, and is a focal point within that vista, its scale being large enough to screen the Old Town behind. Its location appears more random when seen from the south side and Princes Street Gardens, but it dominates the eastern section of the gardens through its scale and elevated position. 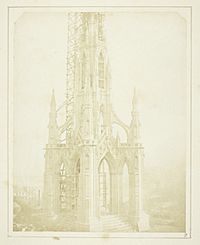 Scott's Monument as it appeared when nearly finished in October 1844 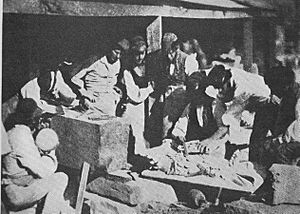 Masons working on the Monument, photographed by Hill & Adamson in the early 1840s 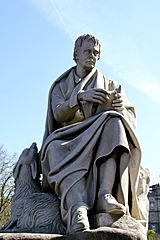 Following Scott's death in 1832, a competition was held to design a monument to him. An unlikely entrant went under the pseudonym "John Morvo", the medieval architect of Melrose Abbey. Morvo was in fact George Meikle Kemp, 45 year-old joiner, draftsman, and self-taught architect. He had feared that his lack of architectural qualifications and reputation would disqualify him, but his design was popular with the competition's judges, and they awarded him the contract to construct the monument in 1838.

John Steell was commissioned to design a monumental statue of Scott to rest in the centre space within the tower's four columns. It is made from white Carrara marble and shows Scott seated, resting from writing one of his works with a quill pen, his dog Maida by his side. The monument carries 64 figures of characters from Scott's novels, sculpted by Scots sculptors including Alexander Handyside Ritchie, John Rhind, William Birnie Rhind, William Brodie, William Grant Stevenson, David Watson Stevenson, John Hutchison, George Anderson Lawson, Thomas Stuart Burnett, William Shirreffs, Andrew Currie, George Clark Stanton, Peter Slater, Amelia Robertson Hill (who also made the statue of David Livingstone immediately east of the monument), and the otherwise unknown Katherine Anne Fraser Tytler.

The foundation stone was laid on 15 August 1840. Construction began in 1841 following permission by Parliament's Monument to Sir Walter Scott Act and ran for nearly four years. It was completed in the autumn of 1844, with Kemp's son placing the finial in August of the year. The total cost was just over £16,154. The monument was inaugurated on 15 August 1846, but George Meikle Kemp was absent. He had fallen into the Union Canal while walking home from the site and drowned on the foggy evening of 6 March 1844.

In the early 1990s it was proposed that the stonework should be cleaned. There were views for and against cleaning and a scientific/geological investigation, including cleaning trials on samples of stone, was carried out. It was decided not to clean the stone due to the damage it would sustain. A restoration programme was undertaken involving replacing old repairs and damaged areas with Binny stone for which purpose the original quarry was re-opened. The fresh stonework contrasts with the smoke-darkened original.

The overall cost of the restoration was £2.36 million and was funded by the Heritage Lottery Fund, Historic Scotland and the City of Edinburgh Council.

The monument is now administered by the Culture and Sport division of the City of Edinburgh Council (See External Links for visitor information) who in 2016 installed a new LED lighting system. The design of the lights was "intended to highlight the monument’s architectural features with a soft warm glow" and were first illuminated on 21 September.

A panorama of Edinburgh, seen from the Scott Monument

All content from Kiddle encyclopedia articles (including the article images and facts) can be freely used under Attribution-ShareAlike license, unless stated otherwise. Cite this article:
Scott Monument Facts for Kids. Kiddle Encyclopedia.