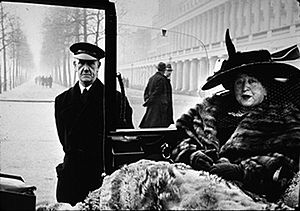 Ingeborg Morath (May 27, 1923 – January 30, 2002) was an Austrian photographer. In 1953 she joined the Magnum Photos Agency. She became a full photographer with them in 1955. In 1955 she published her first collection of photographs, of a total of 30 monographs during her lifetime.

Ingeborg Morath was born in Graz, Austria. Her parents were scientists. They went to different laboratories and universities in Europe during her childhood. She first went to French-speaking schools. In the 1930s her family moved to Darmstadt, a German intellectual center. Then they moved to Berlin.

Morath's first encounter with avant-garde art was the Degenerate Art show by the Nazi party in 1937. It was supposed to make people not like modern art. "I found a number of these paintings exciting and fell in love with Franz Marc's Blue Horse", Morath later wrote.

Morath went to Berlin University. At university, Morath studied languages. She learned French, English, and Romanian. Later she added Spanish, Russian and Chinese. Toward the end of World War II, Morath worked for factory service in Tempelhof, alongside Ukrainian prisoners of war. During an attack on the factory by Russian bombers, she ran on foot to Austria. In later years, Morath would not photograph war.

After the Second World War, Morath worked as a translator and journalist. In 1948, she was hired by Warren Trabant. She worked for Heute. Morath met photographer Ernst Haas in post-war Vienna. She brought his work to Trabant's attention. Working together for Heute, Morath wrote articles to go along with Haas' pictures. In 1949, Morath and Haas were invited by Robert Capa to join the newly founded Magnum Photos in Paris.

Morath was briefly married to the British journalist Lionel Birch. She moved to London in 1951. That same year, she began to photograph during a visit to Venice. Morath asked for an apprenticeship with Simon Guttman. He was then an editor for Picture Post and running the picture-agency Report.

Morath divorced Birch and returned to Paris. Her first jobs were stories that did not interest "the big boys." She went to London on an early job to photograph the residents of Soho and Mayfair. Morath's portrait of Mrs. Eveleigh Nash, from that job, is among her best-known works. During the late 1950s Morath traveled widely. She covered stories in Europe, the Middle East, Africa, the United States, and South America. She worked for such publications as Holiday, Paris Match, and Vogue. In 1955 she published Guerre à la Tristesse, photographs of Spain, with Robert Delpire. This was followed by De la Perse à l'Iran, photographs of Iran, in 1958. Morath published more than thirty monographs during her lifetime.

Like many Magnum members, Morath worked as a still photographer on numerous motion picture sets. She met director John Huston while she was living in London. Huston's Moulin Rouge (1952) was one of Morath's earliest jobs. It was her first time working in a film studio.

Morath married the playwright Arthur Miller on February 17, 1962. They moved to the United States. Miller and Morath's first child, Rebecca, was born in September 1962. The couple's second child Daniel was born in 1966 with Down syndrome. He was institutionalized shortly after his birth. Today Rebecca Miller is a film director, actress, and writer.

Ingeborg Morath Miller died of cancer in New York City in 2002, at the age of 78.

All content from Kiddle encyclopedia articles (including the article images and facts) can be freely used under Attribution-ShareAlike license, unless stated otherwise. Cite this article:
Inge Morath Facts for Kids. Kiddle Encyclopedia.