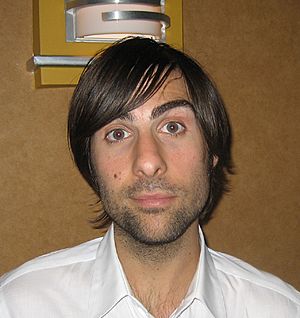 Jason Francesco Schwartzman (born June 26, 1980) is an American actor and musician. He is best known for his starring roles in Funny People, Shopgirl, Spun, Rushmore, I ♥ Huckabees, Marie Antoinette, and The Darjeeling Limited. Schwartzman is in the band Coconut Records. He was a member of the rock band Phantom Planet.

Jason Schwartzman's band Phantom Plantet had the track "California". This song became the theme song for the Fox television series, The O.C. Phantom Planet played with the popular New York band Dopo Yume. Both bands had songs used by The O.C.

Jason was named one of "Top 10 Most Stylish Men in America" by GQ magazine.

All content from Kiddle encyclopedia articles (including the article images and facts) can be freely used under Attribution-ShareAlike license, unless stated otherwise. Cite this article:
Jason Schwartzman Facts for Kids. Kiddle Encyclopedia.