Ahab (Akkadian: 𒀀𒄩𒀊𒁍 ; Greek: Αχααβ; Latin: Achab) was King of Israel and the son of Omri. He is written about in the Books of Kings and the Books of Chronicles.

Ahab son of Omri did "more evil in the eyes of the Lord than any of those before him" (1 Kings 16:30), as it is written in the Bible. Many think - and say - that it is probably because of his evil wife, Queen Jezebel, daughter of Ethbaal king of the Sidonians. She was even more sinful than Ahab, and comes out in the Bible, commanding Ahab to do most of the things she wants. She serves the idol Baal and tries to make Ahab and all the Israelites worship it as well. 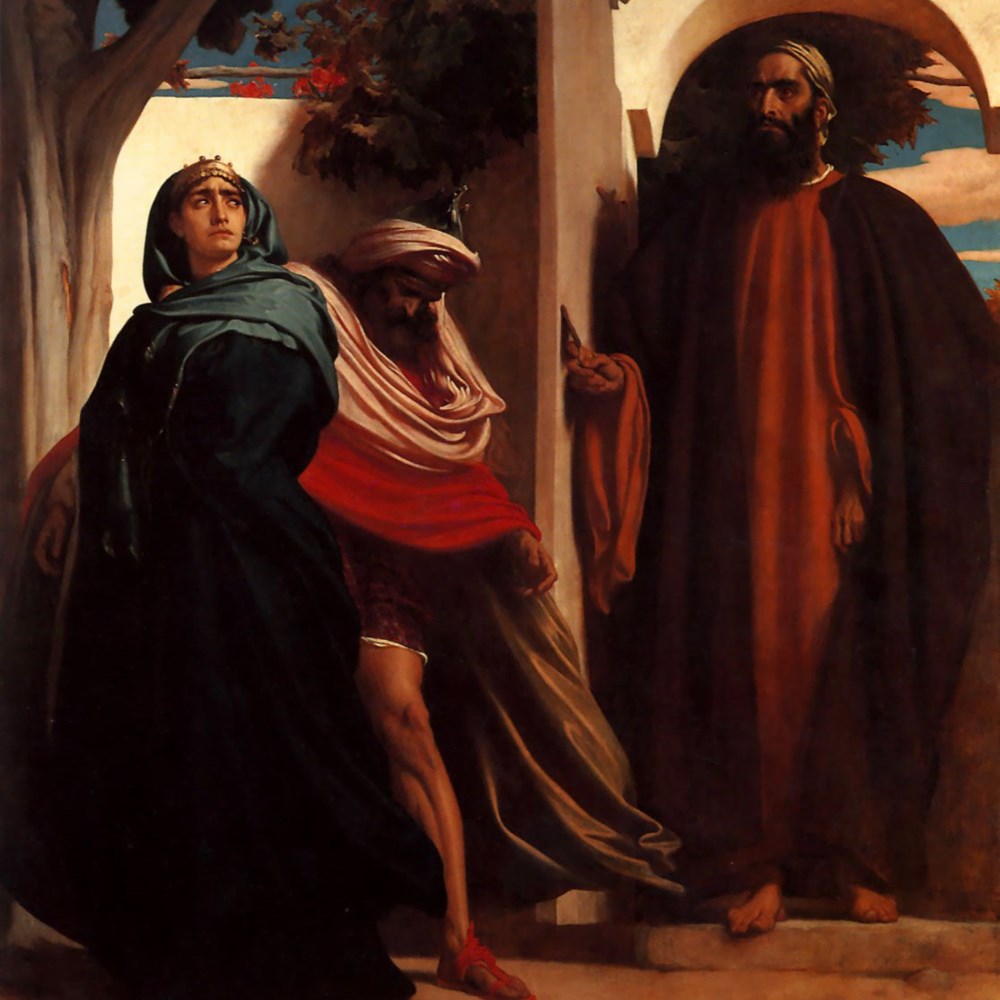 One of Ahab's most famous enemies is an old prophet (a man of God) named Elijah. He continually rebukes Ahab for being so disobeying to the Lord, and when Ahab summoned all the prophets of Baal against Elijah at Mount Carmel, and set two altars for them, Elijah won by calling on God and letting fire come and burn the sacrifice, and the prophets of Baal were immediately killed by the Israelites. Importantly, even here Ahab does nothing, either to stop or help Elijah.

The Battle between Ahab and Ben-Hadad

Once, there was a quite well-known war between Ben-Hadad king of Aram and King Ahab. Ben-Hadad came and, "with thirty-two kings with horses and chariots" (1 Kings 20), he attacked Samaria. He said to King Ahab:
"Your silver and gold are mine, and the best of your wives and children are mine." This King Ahab agreed with—but after that, Ben-Hadad sent another more demanding command: "I sent to demand your silver and gold, your wives and children. But about this time tomorrow I am going to send my officials to search your palace and the houses of your officials. They will seize everything you value and carry it away."—and King Ahab grew annoyed. He rejected that command, and so Ben-Hadad decided to battle against Ahab. And after that the Lord sent a prophet and said, "Do you see this vast army? I will give it into your hand today, and then you will know that I am the Lord." And he also added that the young officers of the commanders will do it, and that King Ahab would start the battle.

Encouraged by this, Ahab took the young officers of the commanders, 232 men. Then he assembled the rest of the Israelites, 7,000 in all. They set out at noon while Ben-Hadad and the 32 kings with him were in their tents getting drunk, and defeated them all.

Later at spring, as a prophet prophesied to Ahab, Ben-Hadad came again, with all his army. They came to the valleys, declaring triumphantly that God was a "gods of hills" and that was why the Israelites were strong; and now that they were in the valleys, they would surely win the battle. But God wanted to prove that he was the God of everything and not only of the hills, so he helped Ahab defeat them there, too. Ahab then spared Ben-Hadad's life. This caused God to get angry at Ahab and say through a prophet (1 Kings 20:42)--"This is what the Lord says: 'You have set free a man that I had determined should die. Therefore it is your life for his life, your people for his people.'"

Ahab also once did a great sin that the Lord was very angry at, and it included a vineyard of Naboh the Jezreelite. He wanted a vineyard belonging to Naboth the Jezreelite, because it was in Jezreel and close to his palace. So Ahab said to Naboth (1 Kings 21:2), "Let me have your vineyard to use for a vegetable garden, since it is close to my palace. In exchange I will give you a better vineyard or, if you prefer, I will pay you whatever it is worth." But Naboth was unwilling because "the Lord forbid" that he should give Ahab "the inheritance of his fathers". So Ahab was very angry and sulky, and when he was at home he wouldn't eat, and pouted on his bed. Then Jezebel came over and asked (1 Kings 21:5), "Why are you so sullen? Why won't you eat?" And Ahab explained to her the situation. Jezebeel told him to get up, and said that she would get him the vineyard of Naboth the Jezreelite.

So she wrote some letters in Ahab's name, placed his seal on them, and sent them to the elders and nobles who lived in Naboth's city. It said:(1 Kings 21:9-10) "Proclaim a day of fasting and seat Naboth in a prominent place among the people. But seat two scoundrels opposite him and have them testify that he has cursed both God and the king. Then take him out and stone him to death."

So the elders and nobles did as she told him to, and Naboth died a bitter, meaningless death.

Then Jezebel declared to Ahab that Naboth was "no longer alive, but dead" and Ahab got up and took possession of Nahab's vineyard. The Lord was very angry at Ahab for this, and said to Elijah the Tishbite, a prophet--(1 Kings 21:18)"Go down to meet Ahab the king of Israel, who rules in Samaria. He is now in Naboth's vineyard, where he has gone to take possession of it. Say to him, "This is what the Lord says: 'have you not murdered a man and seized his property?' Then say to him, 'This is what the Lord says, in the place where dogs licked up Naboth's blood, dogs will lick up your blood - yes, yours!'" 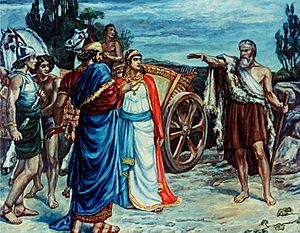 Elijah replied, "I have found you, because you have sold yourself to do evil in the eyes of the Lord. 'I am going to bring disaster on you. I will consume your descendants and cut off from Ahab every last male in Israel - slave or free. I will make your house like that of Jeroboam son of Nebat and that of Baasha son of Ahijah, becauase you have provoked me to anger and have caused Israel to sin.' And also concerning Jezebel the Lord says: 'Dogs will devour Jezebel by the wall of Jezreel.' Dogs will eat those belonging to Ahab who die in the city, and the birds of the air will feed on those who die in the country." At hearing this, Ahab grew afraid, and humbled himself by tearing his clothes, putting on sackcloth, and fasting. He 'lay in sackcloth and went around meekly.' The Lord felt compassionate, and said to Elijah, "Have you noticed how Ahab has humbled himself before me? Because he has humbled himself, I will not bring this disaster in his day, but I will bring it on his house in the days of his son."

According to the Bible, for three years there was no war between Aram and Israel. But in the third year, when Jehoshaphat king of Judah went down to see Ahab (who was now his father-in-law, since Jehoshaphat had married Athaliah, his daughter), Ahab said, "Let's go retake Ramoth Gilead from the king of Aram! Will you go with me?" Jehoshaphat replied, "I am as you are, my people as your people, my horses as your horses." For this, he would later be rebuked by the prophet Jehu. But he added: "First seek the counsel of the Lord."

King Ahab called together the prophets—"about four hundred men"—and asked them, "Shall I go to attack Ramoth Gilead or not?" And they said, "Go." These prophets were not really prophets, but simply did their "job" by saying things that they thought would make the king happy - not what the Lord really said. King Jehoshaphat saw that the 400 prophets were not to be trusted, and asked to see a real prophet of the Lord, saying, "Is there not a prophet of the Lord here...?" King Ahab said that there was Micaiah son of Imlah, but "...he never prophesies anything good about me, but always bad." Jehoshaphat wanted to see him, so Ahab called him. Meanwhile, Zedekiah son of Kenaanah, one of the 400 prophets, had made iron horns and he cried, "This is what the Lord says: 'With these you will gore the Arameans until they are destroyed.'" All the other prophets said the same thing. Even the messenger who had gone to call Micaiah said to him, "Let your word agree with theirs..."

When Micaiah came, he said, "Attack, and be victorious (win)." But Ahab probably saw that Micaiah was not being serious, and he said, "...tell me nothing but the truth..." So Micaiah said that he saw the Lord sitting on his throne in heaven, and that the Lord had put a "lying spirit" in the mouths of all the prophets, because they did not love the truth and had chosen to speak out of their own hearts. At this, one of the prophets, Zedekiah son of Kenaanah was so enraged he went to Micaiah and slapped him in the face, saying sarcastically, "Which way did the spirit from the Lord go when he went from me to speak (talk) to you?" (1 Kings 22:24, NIV) Micaiah replied, "You will find out...[when] you go to hide in an inner room." King Ahab put Micaiah in prison and went to battle in disguise, thinking that this way nobody would know who he was and so Micaiah's prophecy would not be fulfilled (come true). But one of the soldiers shot him by mistake, and he had a deep wound and died in his chariot, watching the battle sadly. As in the prophecy of Elijah, the dogs licked up his blood. After him, his sons succeeded as king, Ahaziah and Jehoram.

All content from Kiddle encyclopedia articles (including the article images and facts) can be freely used under Attribution-ShareAlike license, unless stated otherwise. Cite this article:
Ahab Facts for Kids. Kiddle Encyclopedia.