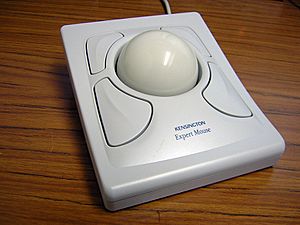 In computing, a trackball is a pointing input device. It consists of a ball held by a socket containing sensors to detect a rotation of the ball about two axes. It is like an upside-down mouse with a ball that sticks out. The user rolls the ball with the thumb, fingers or the palm of the hand to move a cursor. Currently only three major companies: Logitech, A4Tech and Kensington make many of them. Microsoft was once a major producer. Large trackballs are sometimes seen on computerized special-purpose workstations, such as the radar consoles in an air traffic control room, or sonar equipment on a ship or submarine, or computer-aided design. Potentiometers capture the trackball orientation.

All content from Kiddle encyclopedia articles (including the article images and facts) can be freely used under Attribution-ShareAlike license, unless stated otherwise. Cite this article:
Trackball Facts for Kids. Kiddle Encyclopedia.