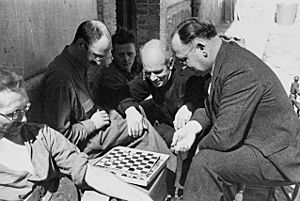 Checkers or draughts is the name of several different board games. All of these games are similar. In every kind of checkers, the other player's pieces can be taken by being "jumped" over.

"Checkers" is the American name. In British English, and in various other English-speaking nations, these games are called "draughts."

The rules and championships are controlled by the World Draughts Federation.

Checkers dates back certainly to the 12th century, in France. These authorities do not admit that discoveries of earlier checkerboards prove the game was played earlier, though it may have been. Some other writers have thought differently, but they were not professional historians. 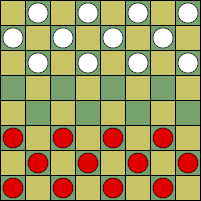 In most games of checkers, there are two players. The players are at opposite ends of the board. One player has dark pieces, and one player has light pieces. They take turns moving their pieces. Players move their pieces diagonally from one square to another square. When a player jumps over their opponent's (the other player's) piece, you take that piece from the board. If you can take a piece, then you must take a piece.

British people call the game "draughts". English draughts is played on an 8x8 chess board. Only the dark squares are used: the light squares are never used.

All content from Kiddle encyclopedia articles (including the article images and facts) can be freely used under Attribution-ShareAlike license, unless stated otherwise. Cite this article:
Checkers Facts for Kids. Kiddle Encyclopedia.