Kids Encyclopedia Facts
This page is about the card game. For other uses, see UNO (disambiguation).

Uno ( from Italian and Spanish for 'one'; stylized as UNO) is an American shedding-type card game that is played with a specially printed deck. The game's general principles put it into the Crazy Eights family of card games, and it is similar to the traditional European game Mau-Mau.

The game was originally developed in 1971 by Merle Robbins in Reading, Ohio, a suburb of Cincinnati. When his family and friends began to play more and more, he spent $8,000 to have 5,000 copies of the game made. He sold it from his barbershop at first, and local businesses began to sell it as well. Robbins later sold the rights to UNO to a group of friends headed by Robert Tezak, a funeral parlor owner in Joliet, Illinois, for $50,000 plus royalties of 10 cents per game. Tezak formed International Games, Inc., to market UNO, with offices behind his funeral parlor. The games were produced by Lewis Saltzman of Saltzman Printers in Maywood, Illinois.

In 1992, International Games became part of the Mattel family of companies. 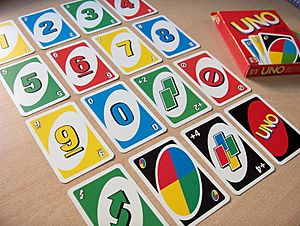 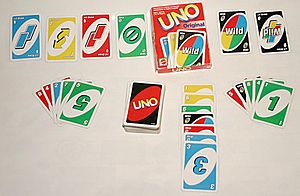 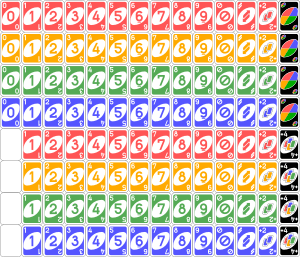 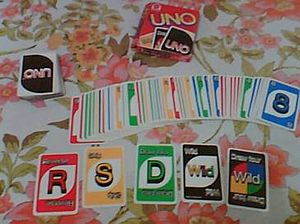 A deck of English Uno cards from 1994. This particular deck uses the older card design, where letters appear on the action cards instead of symbols.

The aim of the game is to be the first player to score 500 points, achieved (usually over several rounds of play) by being the first to play all of one's own cards and scoring points for the cards still held by the other players.

The deck consists of 108 cards: four each of "Wild" and "Wild Draw Four," and 25 each of four different colors (red, yellow, green, blue). Each color consists of one zero, two each of 1 through 9, and two each of "Skip," "Draw Two," and "Reverse." These last three types are known as "action cards."

To start a hand, seven cards are dealt to each player, and the top card of the remaining deck is flipped over and set aside to begin the discard pile. The player to the dealer's left plays first unless the first card on the discard pile is an action or Wild card (see below). On a player's turn, they must do one of the following:

Cards are played by laying them face-up on top of the discard pile. Play proceeds clockwise around the table.

Action or Wild cards have the following effects:

A player who plays their next-to-last-card must call "Uno" as a warning to the other players.

The first player to get rid of their last card ("going out") wins the hand and scores points for the cards held by the other players. Number cards count their face value, all action cards count 20, and Wild and Wild Draw Four cards count 50. If a Draw Two or Wild Draw Four card is played to go out, the next player in the sequence must draw the appropriate number of cards before the score is tallied.

The first player to score 500 points wins the game.

In a two-player game, the Reverse card acts like a Skip card; when played, the other player misses a turn.

The following official house rules are suggested in the Uno rulebook, to alter the game:

A player holding only one card is required to call out "Uno" or risk being penalized if caught. A player who calls "Uno" risks being the target of concerted action by the other players, who may be able to use action cards to prevent that player from going out. Depending on the level and seriousness of play, some players may deliberately avoid saying "Uno", in the hope of avoiding detection and then going out on the next turn. For this reason, it is useful to conceal how many cards are in one's own hand and to keep track of how many cards every other player holds.

Little has been published on the optimal strategy for the game of Uno. Simulations of games may shed some light on the matter. Attempts to reduce point count in a player's hands can be "read" by other players if too transparent. This information can be exploited by other players, and it follows that a mixed strategy may be more appropriate.

All content from Kiddle encyclopedia articles (including the article images and facts) can be freely used under Attribution-ShareAlike license, unless stated otherwise. Cite this article:
Uno (card game) Facts for Kids. Kiddle Encyclopedia.