Minecraft is a video game made by Markus "Notch" Persson. It was run by a company called Mojang, and was sold to Microsoft in 2014 for US$2.5 billion.

Minecraft is an open world survival game where the player can play in a world made of blocks. The player can walk around and break the blocks which make up the interactive landscape. The player can then put the blocks back together to make new constructions. The player uses equipment and tools to break blocks (aka voxels), such as a pickaxe.

On April 29, 2019, It was announced the creator of Minecraft will not be included in the game’s 10th anniversary.

Minecraft was created as an experiment to test random creation for caves. Minecraft was inspired by Infiniminer, another game created by Zachary Barth. The first version of Minecraft was released on May 17, 2009. The beta was released on December 20, 2010. The full game was released on November 18, 2011. At first, Minecraft was created only by Markus Persson. Other people started to work on it when Persson started an independent video game company called Mojang Specifications. The company was later renamed simply to Mojang. Later in 2011, a version of Minecraft named "Pocket Edition" was released for iOS and Android. In 2012, Persson gave HAXOB the job of being the main developer of Minecraft. In 2012, Minecraft came out on the Xbox 360 as a download and was available for 1600 Microsoft Points ($19.99). In 2013, Minecraft came out as a disc for the Xbox 360 and PS3. Versions for the Xbox One and PlayStation 4 were released in September 2014. A version for the PlayStation Vita was released in October 2014. The Wii U edition was released in December 2015. In 2017, versions for the Nintendo Switch and the Nintendo New 3DS were released.

In the game, there are three major game modes. In the "creative" mode, players can create and build with unlimited materials. Almost any structure that you create in Minecraft needs a circle as a base. Tombs, towers, chimneys, tunnels are all created with the help of circles. There are Minecraft circle chart, Minecraft circle guide to make a circle in Minecraft. In survival, the first goal is to survive the night. During the night, monsters come out to fight the player, but players can build a shelter to protect themselves from these monsters. Players can build simple shelters by mining wood logs from trees to survive the night and make weapons to fight back. There are other dimensions in-game called the nether and the end. Portals are required to enter both of these dimensions. The nether portal requires at least 3 obsidian blocks going vertically and 2 horizontally. The nether portal can be larges however it must be a rectangle. End portals are found in strongholds located underground. The best way to find a stronghold is to throw an eye of ender into the sky which will cause it to hover over to the direction of a stronghold. In the End dimension is the ender dragon, the final boss. Players can also create and kill another boss called the wither. Creepers, a popular symbol of the game, were created when Persson tried to change the pig model and accidentally made it taller, rather than longer.

There are 5 game modes in Minecraft:

In all modes (except spectator mode), players can build things such as houses, pixel art and towers. There is also a multiplayer mode, where players can play together over the Internet. This requires the player to enter a server IP address.

Multiplayer, as mentioned above, requires a server address. This is more commonly known as an IP address. Once a player has one of these, they can connect to the server and play with their friends. They can also connect to a server that is very popular and has people the player has never met before and go on any profile they would like.

The other way is to create a local area network (LAN) world, so people connected to the same internet connection can play together.

Minecraft Realms is a special version of the original multiplayer. When buying a realm, players can buy their own server, hosted by Mojang. In Minecraft Realms, there are several "mini-games", which are maps/games created by popular Minecraft users. 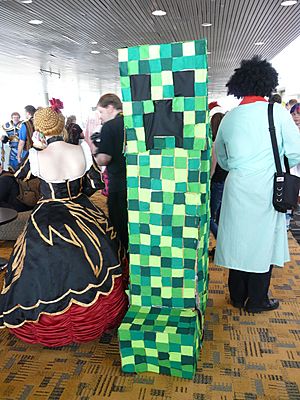 The term "mob" is short for mobster. Mobs are different kinds of monsters, animals, or Non-Player-Characters (NPC). The different types of mobs are:

The player can build a nether portal out of 10 blocks of obsidian in a 5x4 grid (not including corners or inside) and go into a different dimension, the nether. Portals can be upscaled to be bigger, as long as they are still square/rectangular. In the nether, they can fight fireball-shooting ghasts, avoid or fight zombie pigmen, attack magma cubes, duel wither skeletons, search for brewing ingredients, dodge the fiery blaze, and try not to fall into the lava. The players can find nether fortresses where blazes and wither skeletons are common. It is mainly constructed of netherrack and nether brick. Players can also find quartz ore and ancient debris. During Minecon Live, a new update for the Nether was announced.

The player must find an end portal that will teleport them to The End. The only way to find a portal is to find a stronghold, either by accident or by using eyes of ender, which can be crafted by players. If they can fend off endermen and kill the ender dragon, they will be shown the credits screen, which also shows a backstory. They can still play after defeating the ender dragon. After players kill the ender dragon, it drops a black egg with purple spots that cannot be moved easily. However, it can be moved with a piston or by placing a torch two blocks underneath the egg and breaking the block between. Unlike the wither, the ender dragon can only be fought once. In the Console Edition, two of the ender dragon's health regenerators, known as ender crystals, are in iron bars. You will be able to respawn the dragon, and the main end island will have other islands surrounding endlessly.

Minecraft has a very large community with multiple fan forums and multiplayer servers. The Minecraft community is also one of the largest on YouTube with multiple online personalities creating parody songs, having it's own miniature culture, creative videos mimicking Minecraft counterparts such as mobs, building, PVP (player versus player combat) and other aspects of Minecraft.

The first version of Minecraft is called RD.

All content from Kiddle encyclopedia articles (including the article images and facts) can be freely used under Attribution-ShareAlike license, unless stated otherwise. Cite this article:
Minecraft Facts for Kids. Kiddle Encyclopedia.