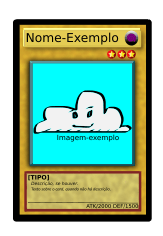 Yu-Gi-Oh! is a manga series, two anime series, and a trading card game (the books came first, then the cards and then the series) based on the two anime series. The series follows the adventures of Yugi Mutou, a high school student who plays a game called Duel Monsters. It has a spin-off called Yu-Gi-Oh! GX. Japan has an exclusive anime based on the first seven volumes of the manga.

"Yu-Gi-Oh cards" are a trading card game that uses monsters that Yugi and other characters on the show use. This trading card game is very popular with young children, teenagers, and even adults in Hong Kong and Taiwan.

The series is about having hope and faith in for the characters and Duel Monsters on each cards. Yugi's grandfather Sugoroku Mutou (Solomon Muto) owns a game shop. One day, Yugi finds a strange puzzle at the back of the shop, and tries to solve it. He tries to solve the puzzle for 8 years. When he is 16, he solves it. When he finishes the puzzle, he gets an extra soul. The soul is Dark Yugi (Yami Yugi), an Egyptian Pharaoh. Yami Yugi successfully recovers his lost memory. Yugi defeats Dark Bakura (Yami Bakura), Dark Yugi's worst enemy.

All content from Kiddle encyclopedia articles (including the article images and facts) can be freely used under Attribution-ShareAlike license, unless stated otherwise. Cite this article:
Yu-Gi-Oh! Facts for Kids. Kiddle Encyclopedia.