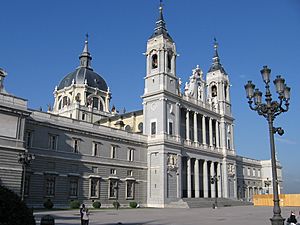 The Almudena Cathedral (Spanish: Catedral de la Almudena) is a Catholic cathedral in Madrid, Spain. It is one of the newest landmarks in Madrid. It is on a hilltop, next to the Royal Palace.

It was designed as long ago as 1879, but then the plans were changed to make it look like a 13th-century cathedral like the one in Rheims. Building started in 1882, but during the Spanish Civil War no more work was done do it, and the building was not finished until the 1980s. The architects who finished it, Fernando Chueca Goitia and Carlos Sidro, made some of the building look neo classical style. It was consecrated in 1993 by Pope John Paul II.

From the front of the cathedral, visitors can see parts of the old city wall which was built in the 9th century.

In May 2004 Prince Felipe, the heir to the throne, married Doña Letitia Ortiz Rocasolano in the cathedral. She was a newsreader on Spanish television.

All content from Kiddle encyclopedia articles (including the article images and facts) can be freely used under Attribution-ShareAlike license, unless stated otherwise. Cite this article:
Almudena Cathedral Facts for Kids. Kiddle Encyclopedia.