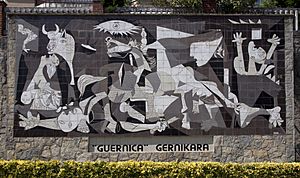 Guernica is infamous for the first use of the Luftwaffe's bombing force against a town and Picasso's famous painting. After such a long time there is little evidence of the bombing but there is this large tiled version of the painting

Guernica is a world-famous painting by Pablo Picasso. It is one of the world's greatest anti-war paintings. It is a very large painting (a mural) which shows the bombing of the Spanish town of Guernica in 1937 during the Spanish Civil War.

The Spanish Republican government asked Pablo Picasso to paint a large mural for an art exhibition in Paris. It shows how people, as well as animals, all suffer because of the tragedies of war. The painting soon became so famous that it was seen as a world symbol for peace. The fame of the painting helped to bring the Spanish Civil War to an end.

Description of the painting

Guernica shows a large, open room with people and animals who are suffering. A bull stands over a woman crying over a dead child in her arms. A horse falls in terrible pain as it dies after being run through with a spear. A dead soldier lies under the horse, his arm has been chopped off, but the hand grasps a shattered sword from which a flower grows. A light bulb shines strongly like an evil eye (the Spanish word for "lightbulb" is "bombilla" which sounds like "bomb"). A female figure floats in, holding a lamp which is a symbol of hope. There are many other smaller details in the painting.

History of the painting

The painting soon travelled to many countries. It was seen in several towns in the United States during the 1940s and early 1950s. The Spanish dictator Francisco Franco wanted it to come to Spain, but Picasso said that he would not allow it to go to Spain until Spain became a democratic country. Picasso died in 1973. Franco died in 1975 and Spain became a democratic country. The painting went to Spain in 1981 and it now hangs in an art gallery, the Museo Reina Sofía, in Madrid.

All content from Kiddle encyclopedia articles (including the article images and facts) can be freely used under Attribution-ShareAlike license, unless stated otherwise. Cite this article:
Guernica (painting) Facts for Kids. Kiddle Encyclopedia.