A statue of Frank Rizzo, sometimes called the Frank L. Rizzo Monument, was installed in Philadelphia, in the U.S. state of Pennsylvania. Erected in 1998, the bronze sculpture was removed in June 2020. Black Lives Matter activists and others protested the statue's presence, and the statue was taken down during the George Floyd protests.

As mayor, Rizzo was a strong opponent of desegregation of Philadelphia's schools, and prevented the construction of public housing in majority-white neighborhoods. While running for a third term, Rizzo urged supporters to "Vote White". During his tenure as police commissioner and mayor, the Philadelphia police department engaged in patterns of police brutality, intimidation, coercion, and disregard for constitutional rights. The patterns of police brutality were documented in a Pulitzer-Prize winning Philadelphia Inquirer series by William K. Marimow and Jon Neuman. 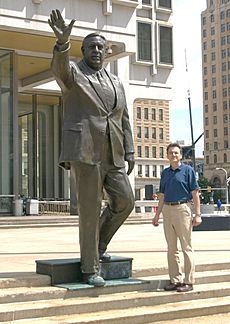 Artist Zenos Frudakis with the statue, 2009

The statue was placed on its pedestal on December 30, 1998 and unveiled on January 1, 1999. A crowd of 150 listened to speeches by Mayor Ed Rendell. The Philadelphia Inquirer reported that sculptor Zenos Frudakis had "decided that his monument should be a statue walking toward the people, hand upheld in a greeting." The Inquirer report did not reference any of the controversy over Rizzo's past.

All content from Kiddle encyclopedia articles (including the article images and facts) can be freely used under Attribution-ShareAlike license, unless stated otherwise. Cite this article:
Statue of Frank Rizzo Facts for Kids. Kiddle Encyclopedia.