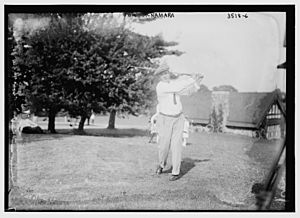 The Baltusrol Golf Club is a private 36-hole golf club in the eastern United States, located in Springfield, New Jersey, about twenty miles (30 km) west of New York City. It was founded 127 years ago in 1895 by Louis Keller.

In 1985, Baltusrol became the first club to have hosted both the U.S. Open and Women's U.S. Open on two different courses. Both courses were originally designed by A. W. Tillinghast in 1918. The club has been the site of seven U.S. Opens and two PGA Championships.

In 2005, the club was listed on the National Register of Historic Places. In 2014, it was further designated a National Historic Landmark in recognition of its importance to Tillinghast's career as a course designer.

Baltusrol Golf Club was named after Baltus Roll (1769–1831), who farmed the land on which the club resides today.

The land was purchased in the 1890s by Louis Keller, who was the publisher of the New York Social Register. He owned 500 acres (2.0 km2) of land in Springfield Township. On October 19, 1895, Keller announced that the Baltusrol Golf Club would open. The club's original 9-hole course was designed by George Hunter in 1895, and expanded to 18 holes in 1898. This course, which is called the Old Course, was further modified by George Low and no longer exists.

Keller hired A. W. Tillinghast to build a second golf course to complement the Old Course. However, Tillinghast recommended that the Old Course be plowed over and he would design and build two new courses. The club approved his design recommendation and commenced construction of the Upper and Lower courses in 1918. In August 1919, Golf Illustrated declared that "what they are planning at Baltusrol is on a vaster scale than anything that has ever been attempted in American Golf for the opening of the Dual Courses." The Dual Courses, or Upper and Lower, would be the first contiguous 36-hole design built in America. Both courses officially opened for play in June 1922. In the years following their opening, refinements were made to prepare these courses for National Championship play. The first national championship held on the Lower was the 1926 United States Amateur. The first national championship on the Upper was the U.S. Open in 1936. Tillinghast served as the club's architect until his death in 1942.

In 1948, Robert Trent Jones was retained to update and lengthen the Lower course for tournament play. The Lower course was lengthened again by his son Rees Jones in 1992 in preparation for the U.S. Open in 1993. He also updated and lengthened the Upper course in advance of the 2000 U.S. Amateur. On both the Lower and Upper courses, Jones and his senior designer Steve Weisser reinstated and restored various Tillinghast design features which had been lost over the years. Some famous golfers to win tournaments at Baltusrol include Ed Furgol, Mickey Wright, Jack Nicklaus, Lee Janzen, and Phil Mickelson. In 1995, Golf Magazine recognized Baltusrol as one of "The First 100 Clubs in America."

In March 1909, the original clubhouse burned down. That same year, a new clubhouse was quickly designed by Chester Hugh Kirk, a member of the golf club, in a Tudor revival style and construction begun in June.

In 1912, it became the first clubhouse to host a President of the United States, William Howard Taft.

Source:
Bolded years are major championships on the PGA Tour

The Upper and Lower courses are very different, being built on two distinct geological formations. Tillinghast designed them as "Dual Courses" which were to be "equally sought after as a matter of preference." The Lower is spread out over rolling parkland, the remains of a terminal moraine deposited during the last glaciation about 18,000 years ago. The Upper runs along a ridge line known as Baltusrol Mountain, the east side of the First Watchung Mountain (Orange Mountain) that was formed from vast lava flows about 200 million years ago. Both courses have ponds and other man-made and natural hazards that come into play. On the Lower Course, the 4th hole and the 18th hole have ponds, and on the Upper Course, the 9th and the 13th holes have ponds. The 10th, 13th, and 15th holes have creeks in play. As of 2010, Baltusrol Golf Club holds the distinction of being the only two-course club to ever host both the U.S. Men's and Women's Open Championships on both of its courses.

The three signature holes of the Lower Course are the fourth, a par three of 194 yards (177 m) where the player must hit his or her ball over the pond to a two-tiered green; the seventeenth, a par five of 650 yards (590 m) where John Daly is the only player to ever reach the green in two strokes (later, Tiger Woods fired his second shot over the green in two shots at the 2005 PGA Championship); and the eighteenth, a par five of 533 yards (487 m) famous for spectacular performances by Furgol, Nicklaus, Mickelson and Jason Day.

The pro shop is open from 7:00 A.M. to 7:00 P.M. The course is not open to the public. Guests are permitted to play with a member. The dress code states that denim is not allowed and that a collared shirt is required. Metal spiked shoes and fivesomes are not allowed. Moreover, cellphone use is not permitted on the course or on club grounds except in one's car. The course is open year-round. Players are required to use a caddy between the hours of 7am and 2pm. The fairways and greens are poa annua and bent grass. The greens are aerated in late March to early April, late August and November, after the season ends, and there is overseeding of Penn A4 Bentgrass. The rough is Kentucky Bluegrass.

All content from Kiddle encyclopedia articles (including the article images and facts) can be freely used under Attribution-ShareAlike license, unless stated otherwise. Cite this article:
Baltusrol Golf Club Facts for Kids. Kiddle Encyclopedia.