Kids Encyclopedia Facts
Not to be confused with Arlington, Ohio.

Upper Arlington, often known by its initials U.A., is a city in Franklin County, Ohio, United States, on the northwest side of the Columbus metropolitan area. The Old Arlington neighborhood is listed on the National Register of Historic Places. As of 2020, the population was 36,800.

The city is around 800 ft elevation located between the Olentangy and Scioto rivers. Two ravines cut through the city. The Slate Run in the northwest corner flows into the Scioto River. However, the Turkey Run is longer. It originates in the north then runs southwards until it makes an eastward bend around Reed Rd. Then, it flows eastwards through the OSU Golf Course. The run is used as a storm drain at points, has been dammed in the Ohio State course and runs through concrete pipes at two points. The soil is glacial till and is suitable for agriculture, supporting a research farm operated by The Ohio State University.

Upper Arlington was founded by the real estate developers Ben and King Thompson, who purchased most of the farmland that was to become Upper Arlington in 1913. This land was directly adjacent to the Marble Cliff Quarry Co. They originally wanted to call it the "Country Club District" after the Country Club development in Kansas City, but by 1917, the community became known as "Upper Arlington", in reference to its southern neighbor of Arlington (now known as Marble Cliff). The Upper Arlington Company was incorporated that year and operated out of a field office built on the former Miller farm; that building is presently the Miller Park branch of the Upper Arlington Library (see no. 4 on the map).

The development proceeded according to the Garden City–inspired plan by landscape architect William Pitkin, Jr., which called for following the contours of the land to form curving streets, copiously lined with trees, rather than a gridded street layout. This development style gave the oldest district in Upper Arlington (at its southernmost end) its distinctively pleasant, park-like feel, though the lack of roadway predictability can lead to some frustrating driving experiences even for those familiar with the neighborhood. The area features numerous small green spaces. 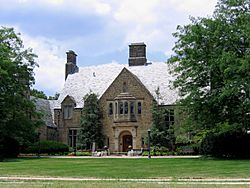 In 1916, the development was interrupted (and largely unfinished) when the National Guard used the area as a temporary training camp called Camp Willis, after Ohio's governor at the time, Frank B. Willis. Most annexation occurred in the late 1940s through 1960. The two largest annexations occurred in 1954 and 1955, by which the city more than doubled its surface area.

As was typical in many developing northern communities of the time, the Thompsons included restrictive covenants in their housing deeds that prevented African-Americans from purchasing homes in Upper Arlington (though the deeds did allow "colored servants" to be domiciled within owners' homes). The covenants also prevented Jewish people from purchasing homes. Today’s population remains predominantly white.

The post–World War II housing boom led to the development of many new housing tracts north of Lane Avenue. The newer developments took on a much different character from the older core of the city, being mostly organized along normal street grids, and with the usually ranch-style houses, this area is called River Ridge. By the 1960s, as the city grew north, the houses were larger and the neighborhoods more consistent with the intent, if not style, of the original section south of Lane Avenue. The southern half of the city, designated as the "Upper Arlington Historic District" (though simply referred to as "Old Arlington"), was listed on the National Register of Historic Places in 1985. The city is sister cities with St. Andrews, Scotland.

There were 13,985 households out of which 31.9% had children under the age of 18 living with them, 59.1% were married couples living together, 6.9% had a female householder with no husband present, and 32.0% were non-families. 28.2% of all households were made up of individuals and 12.9% had someone living alone who was 65 years of age or older. The average household size was 2.39 and the average family size was 2.95.

One notable feature of the Upper Arlington demographic is a "bottleneck" population pyramid, with large numbers of children (under 18), few young adults, and more older adults. The most prevalent population group is 50-64, higher than the national average. This population bottleneck can be explained by young residents moving outside the city upon adulthood and families with children moving to the city at a relatively late age. Such an explanation would also reflect the relatively high price of homes in the city (compared to neighboring areas), which are not affordable for younger adults. Another feature of the Upper Arlington demographic is the overwhelming white majority and the relative lack of other groups except Asians, whose population proportion is similar to the national average and above the Ohio average. In general, Upper Arlington has above average rates of home ownership and relatively few unoccupied homes. 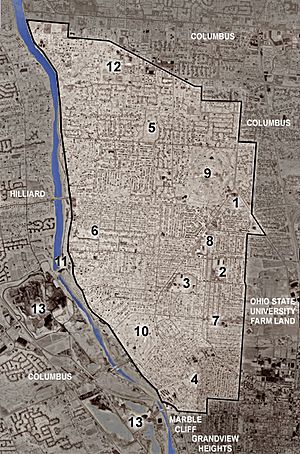 Upper Arlington annually hosts a Fourth of July parade and fireworks display, thanks to the efforts of members of the Upper Arlington Civic Association. The fireworks display is the second largest in the state by volume. The Upper Arlington Labor Day Arts Festival at Northam Park (see no. 3 on the map) and the annual Halloween festival at Tremont Elementary School, where visitors can buy crafts, treats, pumpkins and other items are other notable community events. The City's Parks & Recreation Department hosts numerous events including the Winter Festival and Tree Lighting, Spring Fling, Summer Celebration and Fall Fest. Other events include the Chamber's Taste of UA festival, and during the summer months Upper Arlington also hosts a program called "Movie in the Park" where movies are typically shown free of charge in Upper Arlington's various parks. A farmer's market is held every Wednesday afternoon in the parking lot of the Senior Center in Northam Park from May into October. The City’s Cultural Arts Division hosts a summer Music in the Park series and showcases juried exhibitions featuring two- and three-dimensional art in the Concourse Gallery at the Municipal Services Center, 3600 Tremont Road. 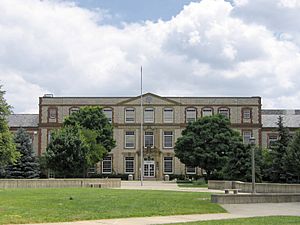 Jones Middle School, located on the former site of Camp Willis. The building, which terminates the mallway at the center of the Historic District, was designed by Ohio Stadium architect Howard Dwight Smith and served as the first permanent school in Upper Arlington upon its completion in 1924.

The Upper Arlington City School District serves the entire municipality. As of 2000, the Upper Arlington Board of Education was the city's largest employer. The district provides an early education school, five elementary schools, two middle schools, and a high school. Burbank Early Education School serves students before the elementary level and was created during a period when the population demanded fewer elementary buildings. The district offers an optional informal/progressive style of education through Wickliffe Progressive Elementary and Barrington Elementary, the latter of which also provides a contemporary program [1]. Other elementary schools include Greensview, Tremont and Windermere.

Hastings Middle School was built in the 1960s and serves the northern area of the district. Jones Middle School is located in the former high school building that was also the site of the Willis National Guard Camp and serves the southern portion. Upper Arlington High School serves students from the entire district and boasts membership in the International Baccalaureate program. The Upper Arlington High School mascot is the Golden Bear, which became the nickname of professional golfer Jack Nicklaus, an alumnus of the school.

All content from Kiddle encyclopedia articles (including the article images and facts) can be freely used under Attribution-ShareAlike license, unless stated otherwise. Cite this article:
Upper Arlington, Ohio Facts for Kids. Kiddle Encyclopedia.