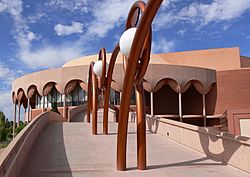 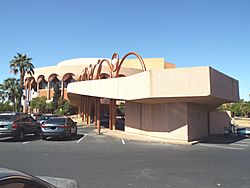 The Grady Gammage Memorial Auditorium is a multipurpose performing arts center in Tempe, Arizona within the main campus of Arizona State University (ASU). The auditorium, which bears the name of former ASU President Grady Gammage, is considered to be one of the last public commissions of American architect Frank Lloyd Wright.

The Gammage stands as one of the largest exhibitors of performing arts among university venues in the world, featuring a wide range of genres and events.

The Auditorium is listed on the National Register of Historic Places.

The process that led to construction of the Gammage Memorial Auditorium began in 1957 when incumbent ASU President Grady Gammage desired a unique auditorium for the ASU campus. In 1956, a collapsed roof rendered a campus facility that served as an auditorium and gymnasium unusable. Gammage recruited his friend Frank Lloyd Wright to design the new auditorium. He would, with various budget related alterations, base its design on an opera house that he had conceptualized for the city of Baghdad, Iraq sometime prior upon the invitation of King Faisal II. Plans for the Baghdad opera house were abandoned after the King's assassination in the 14 July Revolution. Wright is also said to be responsible for the 1200 South Forest Avenue location of the circular auditorium, a site which was then occupied by an athletic field, and earlier by G.I. housing units. Wright and Gammage both died in 1959, leaving Wright's protégé William Wesley Peters to undertake completion of the auditorium. Spearheaded by the R.E. McKee Company, construction of the facility commenced in 1962 and completed twenty-five months later, officially opening on September 18, 1964, in time to host The Philadelphia Orchestra conducted by Eugene Ormandy.

The auditorium was used for the funeral of Arizona Senator and 1964 Republican presidential nominee Barry Goldwater on June 3, 1998.

On October 13, 2004, the auditorium was the site of the third and closing debate between George W. Bush and John Kerry in the 2004 U.S. Presidential Election.

The structure measures 300 feet (91 m) long by 250 feet (76 m) wide by 80 feet (24 m) high. Fifty concrete columns support the round roof with its pattern of interlocking circles. Twin "flying buttress" pedestrian ramps extending 200 feet (61 m) from the north and east sides of the structure connect the building to the parking lot. The auditorium seats 3,017 people on its main floor, grand tier and balcony. The stage can be adapted for grand opera, Broadway musicals, dramatic productions, solo productions, organ recitals and lectures.

Performance and other spaces 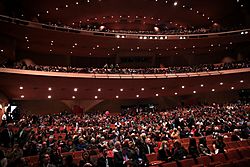 The auditorium has a maximum seating capacity of 3,017. It is wheelchair accessible and has an infrared system for 100 hearing-impaired people (in addition to signers).

All content from Kiddle encyclopedia articles (including the article images and facts) can be freely used under Attribution-ShareAlike license, unless stated otherwise. Cite this article:
Gammage Memorial Auditorium Facts for Kids. Kiddle Encyclopedia.