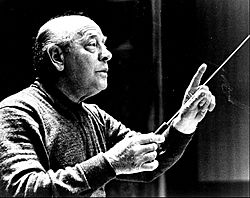 Eugene Ormandy KBE (born Jenő Blau; November 18, 1899 – March 12, 1985) was a Hungarian-born American conductor and violinist, best known for his association with the Philadelphia Orchestra, as its music director. His 44-year association with the orchestra is one of the longest enjoyed by any conductor with any American orchestra. Ormandy made numerous recordings with the orchestra, and as guest conductor with European orchestras, and achieved three gold records and two Grammy Awards. His reputation was as a skilled technician and expert orchestral builder.

Ormandy was born in Budapest, Austria-Hungary, as Jenő Blau, the son of Jewish parents Benjamin Blau, a dentist and amateur violinist, and Rozália Berger. His musical talents emerged early. He was proficient enough as a violinist to enter the Royal National Hungarian Academy of Music at the age of five. Two years later he began studying with Jenő Hubay and the age of 14 he graduated with a master’s degree. After performing as first violin of the Blüthner Orchestra in Berlin and as a soloist on tours of central Europe, he was appointed professor of violin when he was aged 17.

Between 1922 and 1925, Jenő Blau adopted the name to "Eugene Ormandy", "Eugene" being the English equivalent of "Jenő". The origin of the surname "Ormandy" is uncertain. Speculation that it was either his middle name or that of his mother appears to be unfounded. His father changed his surname to "Ormándi" on March 22, 1937, a few weeks before emigrating to the United States.

Arthur Judson, the most powerful manager of American classical music during the 1930s, first heard Ormandy when he conducted (as a freelancer) for a dance recital at Carnegie Hall by Isadora Duncan; Judson later said, "I came to see a dancer and instead heard a conductor".

At Judson's instigation Ormandy substituted for the ailing Arturo Toscanini with the Philadelphia Orchestra in 1931. This led to an appointment as musical director of the Minneapolis Symphony Orchestra, a post he held from 1931 to 1936. In this post he became nationally known in the US through his recordings, which included the first versions on disc of Kodály's Háry János suite and Schoenberg's Verklärte Nacht. In 1936 he returned to Philadelphia as joint conductor with Leopold Stokowski. After two years he became the orchestra's sole music director; he held the post for 42 years (1938–1980), before stepping down to be its conductor laureate. He took the Philadelphia Orchestra on several national and international tours, and appeared as a guest conductor with other orchestras in Europe, Australia, South America and East Asia. Ormandy built on what Grove's Dictionary of Music and Musicians calls "Stokowski's voluptuous 'Philadelphia Sound'" and added further polish and precision. Despite, or even because of, this, among many music critics and others, as Harold C. Schonberg put it in a 1967 study, "there was a singular reluctance in musical circles to admit him into the ranks of great conductors". He was thought superficial; Toscanini dismissed him as "an ideal conductor of Johann Strauss", and a similar remark is attributed to Igor Stravinsky. Donald Peck, principal flute of the Chicago Symphony Orchestra, reports that a fellow flutist was won over when Ormandy conducted the Chicago in Beethoven's Ninth Symphony; he told Peck that it was the greatest Ninth he had ever heard. The conductor Kenneth Woods ranked Ormandy 14th of the "Real Top 20 of Conducting," saying,

Critics hate Ormandy. It must be the first "fact" they teach at critic school – always work in an Ormandy slam into every article you write. Record collectors hate him, too. I just don't get it. The film of him looks pretty impressive – classical and classy conducting technique, not at all showy. His Philadelphia Orchestra was the only real rival to Karajan's Berlin for sonic beauty in the 50s–70s, but was also a tighter and more versatile band.

Schonberg called Ormandy "an excellent technician with a technicolored approach". Grove comments that Ormandy may have contributed to this image by concentrating on the late-Romantic and early 20th-century repertory that showed to advantage the lush sound he could command in works by composers such as Debussy, Ravel, Richard Strauss and Tchaikovsky. Schonberg commented that Ormandy programmed very little Haydn or Mozart and approached Beethoven "in a rather gingerly manner". He conducted much less new music than his predecessor, Stokowski, had done, but did not ignore it, and gave the premieres of works including Rachmaninoff's Symphonic Dances, which is dedicated to him and the orchestra, Bartók's Piano Concerto No.3, Britten's Diversions for Piano Left Hand and Orchestra and music by Ginastera, Hindemith, Martinů, Milhaud, Villa-Lobos and Webern. He did not neglect American composers, and among premieres he gave were works by Samuel Barber, David Diamond, Walter Piston, Ned Rorem, William Schuman, Roger Sessions and Virgil Thomson. 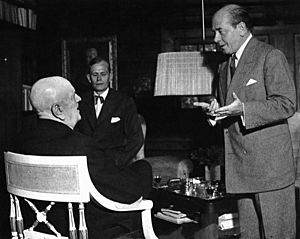 Schonberg concluded his study of Ormandy with the words, "Ormandy does not conduct with the overwhelming personality of a Furtwängler, or with the ferocity and clarity of a Toscanini, or with the immense knowledge and classicism of a Szell. But he has carved out an area for himself, and within it he is secure, a perfect workman and a sensitive interpreter. And it is an area that takes in a great deal more than Strauss waltzes".

In honor of Ormandy's vast influence on American music and the Philadelphia performing arts community, on December 15, 1972 he was awarded the University of Pennsylvania Glee Club Award of Merit. He was appointed by Queen Elizabeth II as an honorary Knight Commander of the Order of the British Empire (KBE) in 1976, and received of Yale University's Sanford Medal. After Ormandy's death the US Congress and President Ronald Reagan declared that November 18 "Eugene Ormandy Appreciation Day", with a recognition ceremony held on that date at the Academy of Music.

On 8 August 1922 Ormandy married Stephanie Goldner (1896–1962). “Steffy” Goldner had come to New York in 1921 from her native Vienna, where she had attended the city's Academy of Music. Soon after arriving in New York she took a position at Capitol Theatre where Ormandy was a violinist. For more than a decade she was harpist for the New York Philharmonic, the only woman on its roster. The two later did broadcast performances on WABC radio, where Ormandy was one of the staff conductors.

In the fall of 1946, the couple parted. “There is no talk now of divorce…It’s just a separation,” Mrs. Ormandy reported. However, she later filed for divorce, decreed 4 August 1947 “on grounds of extreme mental cruelty. Following the divorce she joined the faculty at the Philadelphia Music Academy while announcing plans to resume her performing.

On 15 May 1950 Ormandy married Margaret Frances Hiltsch (1909–1998) in a civil ceremony in Philadelphia. In a statement released by the Philadelphia Orchestra Association, the two were described as “family friends for many years….Mrs. Ormandy came to the United States about 12 years ago from Vienna….shortly thereafter she became an American citizen. During the war years Mrs. Ormandy became a licensed pilot in preparation for the WASP training program. However, as the unit was then disbanded, she enlisted in the U.S. Navy and for two years was then stationed at Norfolk, VA., in operations work at the Naval Air Station.”

The couple remained wed until his death in 1985.

Ormandy's first digital recording was a performance of Béla Bartók's Concerto for Orchestra for RCA Red Seal in 1979.

Ormandy's recording career began with the Minneapolis Symphony for RCA Victor in 1934. He remained with RCA Victor after becoming music director of the Philadelphia Orchestra in 1938. In 1944, Ormandy and the Philadelphians began a 23 year association with Columbia Records. In 1968, conductor and orchestra returned to RCA Victor, recording for the label until 1981. His recordings of Saint-Saëns's Symphony No. 3, "Organ'" were considered the best ever produced by Fanfare Magazine which remarked of the 1974 RCA Red Seal recording with organist Virgil Fox: "This beautifully played performance outclasses all versions of this symphony." The Telarc recording of the symphony with Michael Murray from 1980 is also highly praised.

All content from Kiddle encyclopedia articles (including the article images and facts) can be freely used under Attribution-ShareAlike license, unless stated otherwise. Cite this article:
Eugene Ormandy Facts for Kids. Kiddle Encyclopedia.