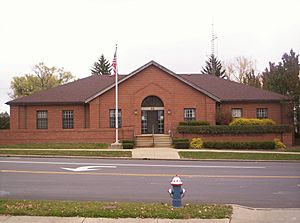 Lexington is a village in Richland County in the U.S. state of Ohio. It is part of the Mansfield, Ohio Metropolitan Statistical Area. The population was 4,822 at the 2010 census, an increase from 4,165 in 2000.

The Mid-Ohio Sports Car Course is located just outside Lexington in Troy Township. This venue hosted an annual round of the CART series from 1990 to 2003, has hosted the IndyCar Series since 2007, has hosted the NASCAR Xfinity Series since 2013, hosts Honda Super Bikes, and Vintage Bikes in addition to a few other annual high-profile events.

Lexington was founded by Amariah Watson, Jr. in 1812, a land speculator who had purchased wide lands locally in order to sell to other settlers. During the 1800s, Lexington had many taverns, hotels, and grist mills — most of which at one time or another burned to the ground. In the 19th century, leading members of the community were William Cockley Thad and Martin Kell, Les Griebling, Erwin Castor, Sgt. Patrick Gass, and Jacob Cook. The first road constructed through town was what is now State Route 97, and the second was what is now Lexington-Ontario Road.

Lexington was first inhabited by the Delaware, Wyandot and Mohawk Indians. They used the hills of Lexington as hunting grounds and they picked berries on their way back from the hunt. The Indians were friendly with Watson when he and his family moved into the area until Watson's pig ate their baby. The Indians demanded Watson's newborn daughter, who was the first white child born in Lexington, as replacement to their own. Watson settled the argument by agreeing to give the Indians the pig instead. Watson chose to name his new home Lexington. He chose this out of respect for his father who fought in the Revolutionary War of which the first battle was fought in Lexington, Massachusetts. In 1813, Watson built a water-powered sawmill along the Clear Fork River. The mill made work easier and attracted more and more settlers. Business owners used the gristmills for their woolen and saw mills and also distilleries. The first tavern was built in 1815 by Jacob Cook. It was called "Cook's Tavern" and the first grocery store was built in 1825 by William Damsell. It was in 1839 that Lexington was recognized as a village by the federal government. In 1850 the railroad made its path through Lexington and this contributed to much of the business activity and travel for the settlers. Also by 1850 Lexington was booming and anyone could get anything they needed from Lexington and its resources. By 1853 there were over 50 established businesses in Lexington, many of which competed with each other. The cemetery is on land originally owned by Amariah Watson himself. It wasn't until 1857 that the village fenced it in to allow a more safe resting place. The sexton house was built in 1863 and the row of maple tress was later planted in 1889. The Lexington Square was once decorated with a Civil War Gatling gun. In 1958 the village of Lexington donated the gun to the Smithsonian Institution and it can still be found there today in Washington, D.C. A structure still standing in Lexington, Ohio from 1843 is known as the "Old Stone House". It was built by James Gass and was host to many runaway slaves traveling along the Underground Railroad. The owners today believe that slaves were hidden in a secret closet. Benjamin Gass took 11-12 slaves in a wagon to Springfield Township and those slaves eventually made their way to Canada. A farm on Texter Road owned by Samuel McClure was also part of the underground railroad and George Mitchell hid slaves in his home and water-powered mill, located near the intersection of today's routes 97 and 314. Many more families in Lexington helped and hid slaves making their way to freedom. While there is no list of names there was a protracted court case against certain citizens who were charged with helping slaves.

Other than Watson, Harry F. Smith is another figure worthy of taking note in Lexington's history. Smith grew up in Lexington and is responsible for the first outdoor lighting system that was powered by steam in 1894. Smith later founded Smith Gas Power Company which was Lexington's largest business at the time and then he sold it to General Motors in 1918. After retirement Smith was involved in helping create Lexington's water system and became known as the "Father of the Clear Fork Reservoir".

According to the United States Census Bureau, the village has a total area of 3.81 square miles (9.87 km2), all land.

There were 1,970 households, of which 32.8% had children under the age of 18 living with them, 52.5% were married couples living together, 12.8% had a female householder with no husband present, 4.0% had a male householder with no wife present, and 30.7% were non-families. 26.4% of all households were made up of individuals, and 8.9% had someone living alone who was 65 years of age or older. The average household size was 2.41 and the average family size was 2.91.

Lexington Local School District operates three elementary schools, one junior high school, and Lexington High School. Currently, a new Junior High and High School is being constructed, with a new Elementry School to be built at a later date.

Lexington has a public library, a branch of the Mansfield–Richland County Public Library.

All content from Kiddle encyclopedia articles (including the article images and facts) can be freely used under Attribution-ShareAlike license, unless stated otherwise. Cite this article:
Lexington, Ohio Facts for Kids. Kiddle Encyclopedia.