Delaware County is a county in the U.S. state of Ohio. As of the 2010 census, the population was 174,214. Its county seat is Delaware. The county was formed in 1808 from Franklin County, Ohio. Both the county and its seat are named after the Delaware Indian tribe.

U. S. President Rutherford B. Hayes was born and grew up in Delaware County. It is also home to the Columbus Zoo and Aquarium.

In 2008, Forbes magazine ranks Delaware County as the fifth best place in the United States to raise a family and the second best in Ohio, behind Geauga County.

The area is served by the Delaware Municipal Airport, which is strategically located to serve the rapidly developing southern Delaware County area and the north portion of the Franklin County and Columbus, Ohio, areas. The airport contains a 5,000 foot runway, flight terminal, lounges, and weather briefing areas. It is home to approximately 80 aircraft and an estimated 40,000 operations take place per year. Several smaller airports are located in the county.

Delaware, Ohio is famous for The Little Brown Jug, an internationally famous harness race which is part of the Triple Crown of harness racing.

The Methodist Theological School in Ohio is the Methodist graduate school seminary located between Delaware and Columbus, Ohio. It is often referred to as METHESCO. 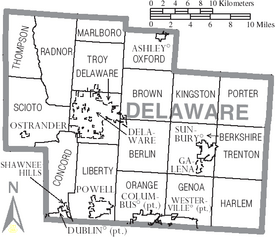 Map of Delaware County, Ohio with Municipal and Township Labels

All content from Kiddle encyclopedia articles (including the article images and facts) can be freely used under Attribution-ShareAlike license, unless stated otherwise. Cite this article:
Delaware County, Ohio Facts for Kids. Kiddle Encyclopedia.