The Columbus Zoo and Aquarium is a non-profit zoo located near Powell in Liberty Township, Delaware County, Ohio, United States, north of the city of Columbus. It has a worldwide reputation and in 2009, it was named by the USA Travel Guide as the number one zoo in the United States. It was also ranked number one best zoo in 2012 by Besties Readers Choice.

The Columbus Zoo is home to more than 7,000 animals representing over 800 species and sees over 2.3 million visitors annually. The animal exhibits are divided into regions of the world, with the zoo currently operating eight such regions. In addition the zoo owns an 18-hole golf course, known as the Safari Golf Club which encompasses 56.656 hectares (140 acres). The zoo also owns Zoombezi Bay which encompasses 9.187 hectares (22.70 acres) and Jungle Jack's Landing which encompasses 4.452 hectares (11 acres). In total, the zoo owns 234 hectares (580 acres) of land, with 164.424 hectares (406.30 acres) dedicated to the zoo itself.

The zoo operates its own conservation program, donating money to outside programs as well as participating in their own conservation efforts. Over the past five years the zoo has contributed over $3.3 million to more than 70 projects in 30 countries. The zoo also has a close working relationship with the Wilds, a 9,154-acre (37.04 km2) animal conservation center located in southeast Ohio and is featured on the Columbus Zoo's website.

The Columbus Zoo is divided into regions, each housing animals from a particular region of the world. Each region is themed for the particular area of the world they are representing, though older regions are themed less than the newly constructed ones. Food and souvenir shops are located throughout the zoo, each one also themed for the region the shop is in.

There are three modes of transportation through the zoo other than walking. These include a train that circles the North America region, a tram that borders the southern part of the North America Region that takes visitors to Polar Frontier, and a boat ride around the Islands of Southeast Asia region.

Polar Frontier opened in May 2010, making it the newest region at the zoo. It was created as an extension of the North America region, featuring animals native to colder climates including Arctic fox and brown bears. The region also marked the return of polar bears to the zoo, whose habitat includes a 167,000 gallon pool and underwater viewing area. The center of the exhibit includes a Conservation/Education Building and a new play area. The zoo added a third polar bear in 2013 and is expanding Polar Frontier for spring 2014. 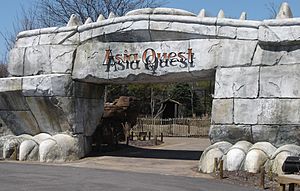 Entrance to the Asia Quest exhibit.

The pachyderm region is home to Asian elephants and black rhinoceros, and is located just west of the North America region. It features a large outdoor habitat for both species, as well as a 41,000 sq ft (3,800 m2) indoor facility that houses the animals during inclement weather. At the time of its opening, it was the largest indoor facility of its kind in North America and the second in the world, with the capacity to house up to 10 elephants and 3–4 rhinos simultaneously. 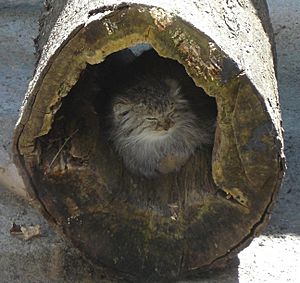 A Pallas's cat sleeping in its habitat at the Columbus Zoo.

Asia Quest opened two phases in 2006. The region is an attempt to more fully immerse visitors into the exhibits, not only building larger and more attractive exhibits, but also melding them together with the scenery. Visitors entering Asia Quest pass a waterfall flanked by two habitats, travel through a cave containing the indoor habitats, exit into a Chinese forest, and finally enter a pheasant aviary designed to look like an abandoned Asian garden. Instead of fences, habitats are either recessed and separated via rock walls, or on ground level and separated by the rock walls and glass. Asia Quest also promotes donations for animal conservation, as many of the region's animals are threatened in the wild. 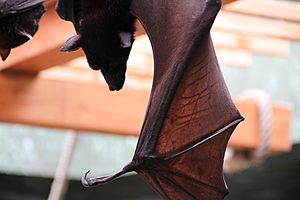 A giant fruit bat at the Columbus Zoo and Aquarium 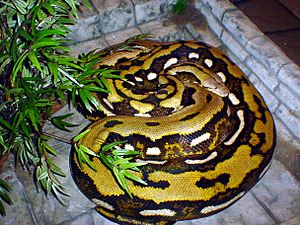 Fluffy at the Columbus Zoo.

In March 2007, Fluffy, a reticulated python (Python reticulatus) and Guinness World Records holder for the longest snake in captivity, was put on display at the zoo. In September 2007, the zoo purchased Fluffy from her owner, and she was on permanent display afterwards. On October 26, 2010, the 300 pound, 18-year-old snake died. A necropsy found a tumorous mass on one of her ovaries. The zoo has since acquired her daughter named Hanna. 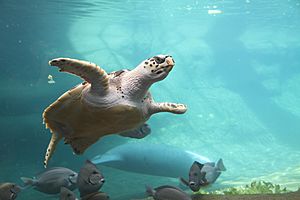 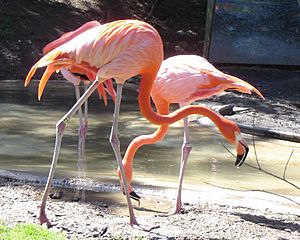 Two flamingos drinking in their habitat.

The shores region is most well known for the fish and manatee aquariums, known as "Discovery Reef" and "Manatee Coast". In addition to the indoor aquariums, the shores region also features exhibits of American flamingos, American alligators, and Humboldt penguins.

Discovery Reef is an 88,000-gallon saltwater aquarium and houses numerous species of fish, stingrays, sharks, and sea turtles. It also houses a live coral exhibit, one of the largest in the United States although the coral in the largest tank is synthetic.

Manatee Coast, which opened in 1999, is the cornerstone of the region, supporting the endangered West Indian manatees in a 192,000 gallon indoor habitat. This habitat is one of only two outside of Florida to keep manatees, making it an especially popular exhibit. The building is also covered by a retractable roof, which creates an outdoor environment for up to five manatees during warm weather. 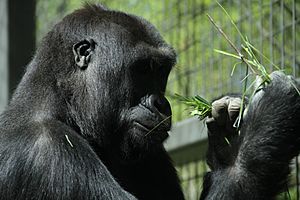 The African forest region, "Congo Expedition," opened in 2000 and showcases animals from the Central African rainforest, which includes numerous primates, hooved mammals, large cats, and many birds housed in an aviary. The highlight of the region is the primate area featuring three generations of western lowland gorillas, the progeny of Colo.

The Columbus Zoo has a rapidly expanding group of bonobos, also known as pygmy chimpanzees. Bonobos are the closest living relative to humans and are only found at eight U.S. zoos and less than 20 worldwide zoos outside their native Democratic Republic of the Congo, where they are critically endangered.

On May 18, 2012, one of the zoo's gorillas, Mumbah, died of heart failure at the age of 47. Mumbah had been part of the Columbus Zoo since 1984, when he was acquired from an animal park in England. 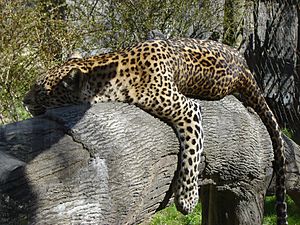 A leopard sleeping on a log at the Columbus Zoo.

Voyage to Australia and the Islands 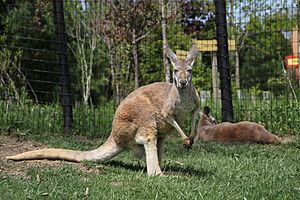 Red kangaroo in the Walkabout Exhibit

The Australia region is located on the far west side of the zoo, lying along the east bank of the Scioto River. The "Roadhouse" nocturnal exhibit opened in November 2003, while the kangaroo walkabout, koala habitat, and Lorikeet Aviary opened in 2004. "Bob and Evelyn's Roadhouse" is an indoor nocturnal exhibit displaying animals from Southeast Asia, Australia, and New Zealand. The "Roadhouse" features animals including woylie, and brown kiwi. The final section of the "Roadhouse" is an indoor flight aviary displaying over twenty species of Asian and Australian birds and a diurnal exhibit for an Indian crested porcupine and Prevost's squirrels. The regions feature habitat is the Kangaroo Walkabout exhibit, which houses red kangaroos and an eastern grey kangaroo. The habitat is at ground-level, which allows visitors to walk through the actual habitat along with the kangaroos. The Columbus Zoo is one of only eight US zoos to permanently house koalas and is one of the few US zoos to display the species in both outdoor and indoor habitats. The indoor exhibit also features a short-beaked echidna. The final exhibit in the region is Lorikeet Garden featuring rainbow lorikeets. The exhibit allows visitors to purchase a cup of nectar and feed the birds.

The Islands of Southeast Asia region opened in 2003. Similarly to Asia Quest, Islands of Southeast Asia attempts to be more immersive, melding the exhibits and scenery to create the feeling that the visitor is walking through one continuous exhibit. This is done mostly with man-made scenery and vegetation. Included in the man-made scenery is a waterway that flows around the region and carries the boat ride from which visitors can view the region's exhibits.

The "Heart of Africa" region is located to the north and east of the zoo. The area encompasses 43 acres (170,000 m2) of land, and feature many African plains animals. One exhibit in the new region are lions, which were moved in order to accommodate Asia Quest, as well as giraffes, cheetahs, zebras, and vervet monkeys. Following the design of recent exhibits such as the Islands of Southeast Asia, the African savanna attempts to merge habitats and scenery to make visitors feel as if they are on the plains. Other features including giraffe feedings, camel rides, as well as dining facilities. 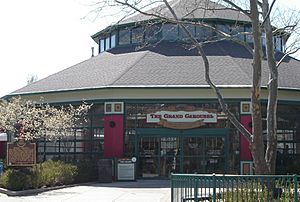 The Mangels-Illions Carousel, post-restoration, on the grounds of the Columbus Zoo and Aquarium.

In the spring of 2000, the zoo added its restored 1914 Mangels-Illions carousel. When the park closed in 1938, the carousel was moved to Wyandot Lake where it continued operating for sixty years, though in deteriorating condition. In 1999, the carousel was removed from Wyandot Lake and underwent a million dollar restoration before being moved to a new location at the zoo. With 52 hand carved horses, 2 chariots, and a Wurlitzer 153 band organ, this rare "grand carousel" in the Coney Island style is one of only a few manufactured by the William F. Mangels Company with wooden horses carved by M. C. Illions and Sons Carousell Works, and is thus known as a Mangels-Illions carousel. It was ridden 42,000 times in its first month of operation at the zoo, and celebrated its one millionth rider on July 28, 2004.

The zoo purchased Wyandot Lake at the end of 2006 and have renovated the park into "Zoombezi Bay". The new water park contains 17 major slides and attractions. The park opened in May 2008 and is accompanied by Jungle Jack's Landing, the dry ride park. 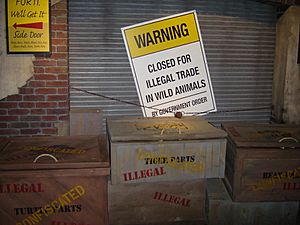 The Columbus Zoo and Aquarium runs a conservation program that funds multiple projects outside of the zoo. In 2010, the zoo provided more than $2 million worth of grants to support conservation projects worldwide. These monies come from fundraisers, visitor donations and privately raised funds. Projects the zoo supports include the Dian Fossey Gorilla Fund, the International Elephant Foundation, and the Ohio Wildlife Center.

In an effort to increase funding for, and public awareness of, the conservation projects around the world, the Columbus Zoo has in recent years incorporated information about threatened and endangered species into exhibits. In addition to helping visitors become more aware, the zoo has also added donation boxes that help fund the many projects the Columbus Zoo supports.

The Columbus Zoo is also involved in conservation programs internally. Manatee Coast, while built as an exhibit, is also a rehabilitation facility for injured manatees. Due to the threatened status of manatees in the wild, Manatee Coast attempts to inform its visitors of the manatee's situation, with an entire room dedicated to manatee conservation. This room includes a video describing the manatee's natural habitat and what can be done to protect them.

The Columbus Zoo also runs a breeding program for Mexican wolves. This program has the goal of having a population of at least 100 wolves living in what was once their natural range. Mexican wolves became extinct in the wild in the mid-20th century due to being trapped, poisoned, and shot. Since the zoo became involved in 1992, 29 pups have been born at their facility.

All content from Kiddle encyclopedia articles (including the article images and facts) can be freely used under Attribution-ShareAlike license, unless stated otherwise. Cite this article:
Columbus Zoo and Aquarium Facts for Kids. Kiddle Encyclopedia.