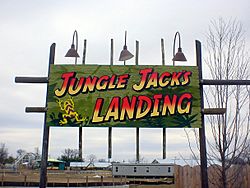 Front sign from when the park used to be called Jungle Jack's Landing.

Rides At Adventure Cove is a small amusement park area that is part of and owned by the Columbus Zoo and Aquarium in Powell, Ohio. The park was originally part of Wyandot Lake before the zoo purchased the property in 2006, splitting it into two separate sections after the 2006 season. The water park became known as Zoombezi Bay while the dry ride area became Jungle Jack's Landing. The amusement park was named after zoo director emeritus Jack Hanna and opened on May 26, 2008. It debuted with 14 rides and attractions, several of which were retained from the former Wyandot Lake. In 2020, the Jungle Jack's Landing name was dropped with the amusement park area being renamed to tie into the neighboring Adventure Cove area of the Columbus Zoo and Aquarium which opened for the first time on the same year.

All content from Kiddle encyclopedia articles (including the article images and facts) can be freely used under Attribution-ShareAlike license, unless stated otherwise. Cite this article:
Rides At Adventure Cove Facts for Kids. Kiddle Encyclopedia.