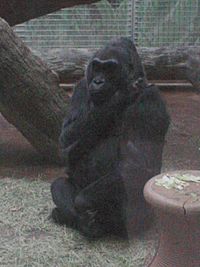 Colo (December 22, 1956 – January 17, 2017) was an American Western gorilla. She was known as the first gorilla to be born in captivity anywhere in the world and as the oldest known gorilla in the world. Colo was born at the Columbus Zoo and Aquarium near Powell, Ohio. Colo's name came from the place of her birth, Columbus, Ohio. Tomatoes were her favorite food.

All content from Kiddle encyclopedia articles (including the article images and facts) can be freely used under Attribution-ShareAlike license, unless stated otherwise. Cite this article:
Colo (gorilla) Facts for Kids. Kiddle Encyclopedia.