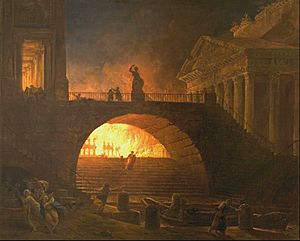 Fire in Rome by Hubert Robert. A painting of the fire burning through Rome.

The Great Fire of Rome was an urban fire that occurred in July, 64 AD. The fire began in the merchant shops around Rome's chariot stadium, Circus Maximus, on the night of July 19. After six days, the fire was brought under control, but before the damage could be measured, the fire reignited and burned for another three days. In the aftermath of the fire, two thirds of Rome had been destroyed.

Nero was proclaimed emperor in 54 AD at the age of 16. His rule has commonly been associated with impulsiveness and tyranny. Early in his rule, he was heavily advised, but he slowly became more independent. In 59 AD, encouraged by his mistress Poppaea, Nero murdered his mother. His leading adviser, Seneca, was discharged and forced to commit suicide. After the Great Fire of Rome occurred in 64 AD, it was rumored that Nero ordered the fire to clear space for a new palace.Template:Page number

Publius Cornelius Tacitus was a senator and historian of the Roman Empire. His exact birth date is unknown, but most sources place it in either 56 or 57 AD. His two main works, the Annals and the Histories, covered the history of the empire between 14 AD and 96 AD. However, much of the work has been lost, including the books covering events after 70 AD. He was only 8 years old at the time of the fire, but he was able to use public records and reports to write an accurate account.

Outbreak and progress of fire

According to Tacitus, the fire began in shops where flammable goods were stored, in the region of the Circus neighboring the Caelian and Palatine Hills of Rome. The night was a windy one and the flames rapidly spread along the full length of the Circus. The fire expanded through an area of narrow, twisting streets and closely located apartment blocks. In this lower area of ancient Rome there were no large buildings such as temples, or open areas of ground, to impede the conflagration. It then spread along the Palatine and Caelian slopes. The population fled first to areas unaffected by the fire and then to the open fields and rural roads outside the city. Looters and arsonists were reported to have spread the flames by throwing torches or, acting in groups, hindering measures being made to halt or slow the progress of the flames. The fire stopped after six days of continuous burning. However, it soon reignited and burned for another three days.

According to Tacitus, Nero was away from Rome, in Antium, when the fire broke out. Nero returned to the city and took measures to bring in food supplies and open gardens and public buildings to accommodate refugees. Of Rome's 14 districts, 3 were completely devastated, 7 more were reduced to a few scorched and mangled ruins and only 4 completely escaped damage. The fire destroyed mostly everything it came in contact with due to poorly built and maintained timber-framed homes. The Temple of Jupiter Stator, the House of the Vestals, and Nero's palace, the Domus Transitoria were destroyed. Also destroyed in the fire was the portion of the Forum where the Roman senators lived and worked. However, the open mall in the middle of the Forum remained and became a commercial centre. The accusations of Nero having started the fire were further exacerbated by his quickness to rebuild burned neighborhoods in the Greek style and to launch construction of his new palace. The new palace, known as Golden House, would have been massive, covering a third of Rome.

The varying historical accounts of the event come from three secondary sources—Cassius Dio, Suetonius and Tacitus. The primary accounts, which possibly included histories written by Fabius Rusticus, Marcus Cluvius Rufus and Pliny the Elder, do not survive. At least six separate stories circulate regarding Nero and the fire:

All content from Kiddle encyclopedia articles (including the article images and facts) can be freely used under Attribution-ShareAlike license, unless stated otherwise. Cite this article:
Great Fire of Rome Facts for Kids. Kiddle Encyclopedia.