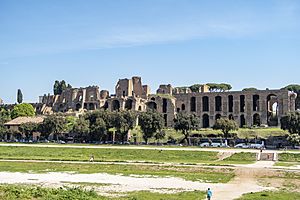 View of the Palatine Hill from across the Circus Maximus. 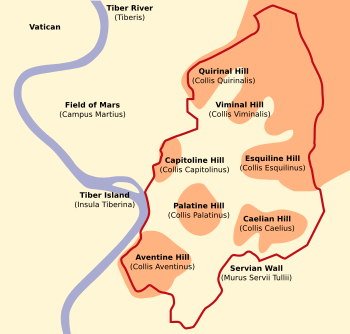 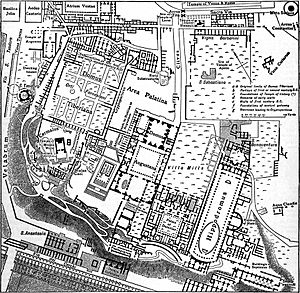 Plan of the Palatine

Palaces on the Palatine 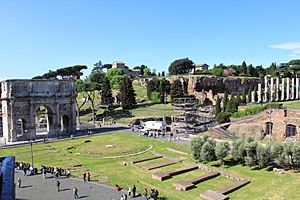 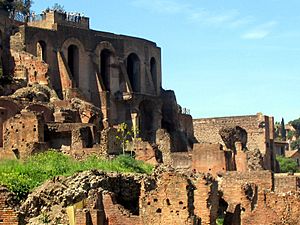 Massive retaining walls extended the area on the Palatine available for the Imperial building complex.

The Palatine Hill, which is the centremost of the Seven Hills of Rome, is one of the most ancient parts of the city and has been called "the first nucleus of the Roman Empire." It stands 40 metres above the Roman Forum, looking down upon it on one side, and upon the Circus Maximus on the other. From the time of Augustus Imperial palaces were built here. Prior to extensions to the Palace of Tiberius and the construction of the Domus Augustana by Domitian, 81-96 AD, the hill was mostly occupied by the houses of the rich. The perimeter measures 2,182 meters and the area is 255,801 square meters or 63 acres, with a circumference of 1,740 meters while the Regionary Catalogues of the fourth century give a perimeter of 11,510 feet or 3,402 meters (equals 131 acres.

The hill is the etymological origin of the word palace and its cognates in other languages (Italian: palazzo, French: palais, Spanish: palacio, Portuguese: palácio, German: Palast, Czech: palác, etc.).

According to Livy (59 BC – AD 17) the Palatine hill got its name from the Arcadian settlement of Pallantium. More likely, it is derived from the noun palātum "palate"; Ennius uses it once for the "heaven", and it may be connected with the Etruscan word for sky, falad.

According to Roman mythology, the Palatine Hill was the location of the cave, known as the Lupercal, where Romulus and Remus were found by the she-wolf Lupa that kept them alive.

Another legend occurring on the Palatine is Hercules' defeat of Cacus after the monster had stolen some cattle. Hercules struck Cacus with his characteristic club so hard that it formed a cleft on the southeast corner of the hill, where later a staircase bearing the name of Cacus was constructed.

Rome has its origins on the Palatine. Excavations show that people have lived in the area since the 10th century BC. Excavations performed on the hill in 1907 and again in 1948 unearthed a collection of huts believed to have been used for funerary purposes between the 9th and 7th century BC approximating the time period when the city of Rome was founded.

According to Livy, after the immigration of the Sabines and the Albans to Rome, the original Romans lived on the Palatine. The Palatine Hill was also the site of the ancient festival of the Lupercalia.

Many affluent Romans of the Republican period (c.509 BC – 44 BC) had their residences there.

The great fire of 64 AD destroyed Nero's palace, but he replaced it by 69 AD with the even larger Domus Aurea over which was built Domitian's Palace

The Palatine Hill is an archaeological site open to the public (requires payment).

The Palace of Domitian which dominates the site and looks out over the Circus Maximus was rebuilt largely during the reign of Domitian over earlier buildings of Nero.

Later emperors particularly the Severans made significant additions to the buildings.

Houses of Livia and Augustus 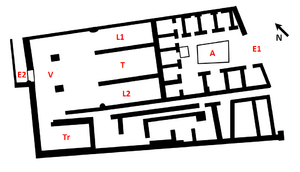 The House of Livia, the wife of Augustus, is conventionally attributed to her based only on the generic name on a clay pipe and circumstantial factors such as proximity to the House of Augustus.

The building is located near the Temple of Magna Mater at the western end of the hill, on a lower terrace from the temple. It is notable for its beautiful frescoes. 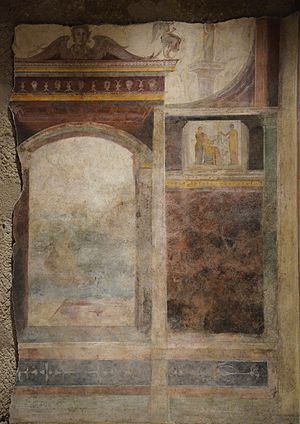 Fresco of the tablinium of the House of Livia 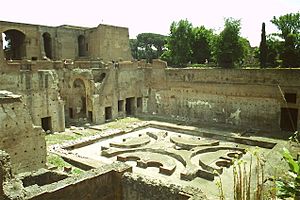 Water garden of the Domus Augustana

The House of Tiberius was built by Tiberius, but Tiberius spent much of his time in his palaces in Campania and Capri. It was later incorporated into Nero's Domus Transitoria. Part of it is remains in the current Farnese Gardens.

During Augustus' reign, an area of the Palatine Hill was roped off for a sort of archaeological expedition, which found fragments of Bronze Age pots and tools. He declared this site the "original town of Rome." Modern archaeology has identified evidence of Bronze Age settlement in the area which predates Rome's founding. There is a museum on the Palatine in which artifacts dating from before the official foundation of the City are displayed. The museum also contains Roman statuary.

An altar to an unknown deity, once thought to be Aius Locutius, was discovered here in 1820.

In July 2006, archaeologists announced the discovery of the Palatine House, which they believe to be the birthplace of Rome's first Emperor, Augustus. Head archaeologist Clementina Panella uncovered a section of corridor and other fragments under Rome's Palatine Hill, which she described on July 20 as "a very ancient aristocratic house." The two story house appears to have been built around an atrium, with frescoed walls and mosaic flooring, and is situated on the slope of the Palatine that overlooks the Colosseum and the Arch of Constantine. The Republican-era houses on the Palatine were overbuilt by later palaces after the Great Fire of Rome (64), but apparently this one was not; the tempting early inference is that it was preserved for a specific and important reason. On the ground floor, three shops opened onto the Via Sacra.

The location of the domus is important because of its potential proximity to the Curiae Veteres, the earliest shrine of the curies of Rome. 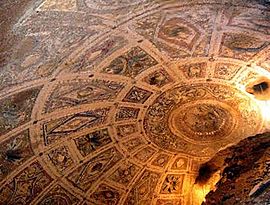 The photo of the excavated cave beneath the Domus Livia on the Palatine Hill, believed to be the Lupercal. The photo was taken with a remote sensing device.

In January 2007, Italian archeologist Irene Iacopi announced that she had probably found the legendary Lupercal cave beneath the remains of Augustus' residence, the Domus Livia (House of Livia) on the Palatine. Archaeologists came across the 16-metre-deep cavity while working to restore the decaying palace. The first photos of the cave show a richly decorated vault encrusted with mosaics and seashells. The Lupercal was probably converted to a sanctuary by Romans in later centuries.

In November 2007 archaeologists unveiled photographs of the cave. Partially collapsed and decorated with seashells and colored marble, the vaulted sanctuary is buried 16 metres inside the Palatine hill. A white eagle was found atop the sanctuary's vault. Most of the sanctuary is collapsed or filled with earth, but laser scans allowed experts to estimate that the circular structure has a height of 8 metres and a diameter of 7.3 metres.

All content from Kiddle encyclopedia articles (including the article images and facts) can be freely used under Attribution-ShareAlike license, unless stated otherwise. Cite this article:
Palatine Hill Facts for Kids. Kiddle Encyclopedia.