Arch of Constantine facts for kids 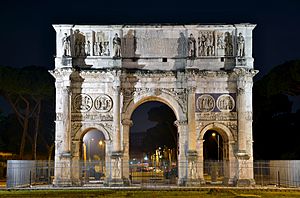 The Arch of Constantine (Italian: Arco di Costantino) is an arch in Rome, found between the Colosseum and the Palatine Hill. It was built in honour of Constantine I's victory over Maxentius at the Battle of Milvian Bridge on October 28, 312. It is the latest of the triumphal arches in Rome.

The main inscription was made of bronze letters. It says (identically on both sides):

To the Emperor Caesar Flavius Constantinus, the greatest, pious, and blessed Augustus: because he, inspired by the divine, and by the greatness of his mind, has delivered the state from the tyrant and all of his followers at the same time, with his army and just force of arms, the Senate and People of Rome have dedicated this arch, decorated with triumphs.

Two short inscriptions on the inside of the central archway say:

Over each of the small archways, inscriptions say:

All content from Kiddle encyclopedia articles (including the article images and facts) can be freely used under Attribution-ShareAlike license, unless stated otherwise. Cite this article:
Arch of Constantine Facts for Kids. Kiddle Encyclopedia.