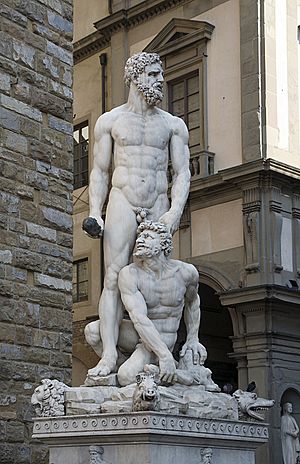 Hercules and Cacus by Baccio Bandinelli, 1534

Cacus is a character in Roman mythology. He was a hideous, three-headed, fire-belching shepherd who lived in a cave in the Aventine Forest in Italy. Cacus' parents were Hephaestus and Medusa.

Hercules had stolen the Geryon's cattle. He was driving the herd through Italy when Cacus crossed his path. Cacus stole some of the animals. He dragged them backwards to his cave to confuse Hercules.

The next morning, Hercules missed the animals at once. He went to Cacus' cave. Cacus had put a huge rock at the entrance but Hercules tossed it aside. Cacus tried to drive Hercules off by belching fire, but Hercules won the battle. Hercules put together an altar to Zeus. He later set up his own worship at the site. Some say it was not Hercules who killed Cacus but a huge shepherd named Garanus or Recaranus, a friend of Hercules'.

All content from Kiddle encyclopedia articles (including the article images and facts) can be freely used under Attribution-ShareAlike license, unless stated otherwise. Cite this article:
Cacus Facts for Kids. Kiddle Encyclopedia.