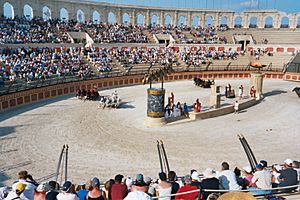 A modern recreation of chariot racing in Puy du Fou

Chariot races were a popular sport in Ancient Greece and Rome. Chariot racing was dangerous to both drivers and horses as they often suffered serious injury and even death, but these dangers added to the excitement and interest for spectators. Chariot races could be watched by women, who were banned from watching many other sports. In the Roman form of chariot racing, teams represented different groups of financial backers and sometimes competed for the services of particularly skilled drivers.

All content from Kiddle encyclopedia articles (including the article images and facts) can be freely used under Attribution-ShareAlike license, unless stated otherwise. Cite this article:
Chariot racing Facts for Kids. Kiddle Encyclopedia.