Erik the Red facts for kids

Erik Thorvaldsson (c. 950 – c. 1003), known as Erik the Red, was a Norse explorer, described in medieval and Icelandic saga sources as having founded the first settlement in Greenland.

He was most likely called "the Red" due to the color of his hair and beard.

According to Icelandic sagas, he was born in the Jæren district of Rogaland, Norway, as the son of Thorvald Asvaldsson.

One of Erik's sons was the well-known Icelandic explorer Leif Erikson.

Because of different killings, Erik the Red's father, Thorvald Asvaldsson, was banished from Norway. He sailed west from Norway with his family, including 10-year-old Erik, and settled in Hornstrandir in northwestern Iceland, where he eventually died before 980.

Erik married Hawksdale where he built a farm. Medieval Icelandic tradition relates that Erik the Red and his wife had four children: a daughter, Freydís, and three sons, the explorer Leif Erikson, Thorvald and Thorstein.

Unlike his son Leif and Leif's wife, who became Christians, Erik remained a follower of Norse paganism. While Erik's wife took heartily to Christianity, even commissioning Greenland's first church, Erik greatly disliked it and stuck to his Norse gods.

Following in his father's footsteps, Erik also found himself exiled for a time because he killed his neighbor. The Icelanders later sentenced Erik to exile for three years for killing around the year 982.

Erik then moved to the island of Eyxney.

Erik's son Leif Erikson became the first Viking to explore the land of Vinland – part of North America, probably near modern-day Newfoundland–and invited his father on the voyage. However, according to legend, Erik fell off his horse on the way to the ship and took this as a bad sign, leaving his son to continue without him.

Erik died in an epidemic that killed many of the colonists in the winter after his son's departure. 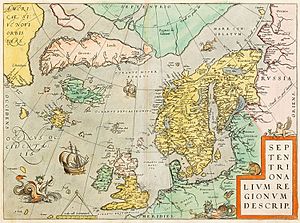 Map of the northern region (including some fantasy islands) by Abraham Ortelius, c. 1570 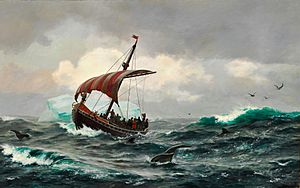 [Gunnbjörn Ulfsson]] may he have been the first person to find Greenland nearly a century before Erik but because it was "accidental" Erik the Red was classified as the first as he was the first permanent European settler.

During his exile, around 982, Erik sailed to a somewhat mysterious and little-known land. According to the Saga of Erik the Red, he spent his three years of exile exploring this land.

When Erik returned to Iceland after his exile had expired, he is said to have brought with him stories of "Greenland". Erik deliberately gave the land a more appealing name than "Iceland" in order to lure potential settlers.

After spending the winter in Iceland, Erik returned to Greenland in 985 with a large number of colonists. Out of 25 ships that left for Greenland eleven were lost at sea; only 14 arrived. The Icelanders established two colonies on the southwest coast and a Western Settlement. The Eastern and Western Settlements, both established on the southwest coast, were the only two areas suitable for farming.

During the summers, when the weather was more favorable to travel, each settlement would send an army of men to hunt in above the Arctic Circle for food and other valuable commodities such as seals (used for rope), ivory from walrus tusks, and beached whales.

In the Eastern Settlement, Erik built the estate of Brattahlíð, near present-day Narsarsuaq. He held the title of paramount chieftain of Greenland and became both greatly respected and wealthy.

The settlement flourished, growing to 5,000 inhabitants spread over a considerable area. Groups of immigrants escaping overcrowding in Iceland joined the original party. One group of immigrants which arrived in 1002 brought with it an epidemic that ravaged the colony, killing many of its leading citizens, including Erik himself. Nevertheless, the colony rebounded and survived until the Little Ice Age made the land marginal for European life-styles in the 15th century–shortly before Christopher Columbus's first voyage to the Americas in 1492.

Pirate raids, conflict with Inuit moving into the Norse territories, and the colony's abandonment by Norway became other factors in its decline.

All content from Kiddle encyclopedia articles (including the article images and facts) can be freely used under Attribution-ShareAlike license, unless stated otherwise. Cite this article:
Erik the Red Facts for Kids. Kiddle Encyclopedia.