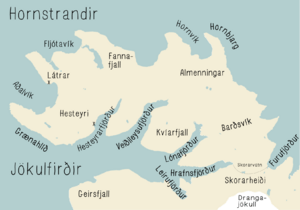 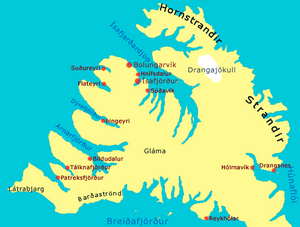 The Westfjords with Hornstrandir at the northern end

Hornstrandir is Iceland's northernmost peninsula, covering 580 km2 (220 sq mi) at the northern end of the Westfjords, to the north of the Jökulfirðir and to the northwest of Drangajökull glacier.

The area covers 580 km2 (220 sq mi) of tundra, fjord, glacier and alpine land with rich but fragile vegetation, and protected as Hornstrandir Nature Reserve since 1975, under some of the strictest preservation rules in Iceland. The area's nature thrived with very few humans inhabiting it. In the 1950s also the handful of its residents who were based on agricultural livelihood left. However, decades later some of their descendants returned and rebuilt their old houses, and much of the land is privately owned.

Jökulfirðir, meaning Glacier Fjords, is the formation of five fjords and bays, four of which consist the entire southern land and most twisted coastline of Hornstrandir while the fifth lies just south of the peninsula. From west to east, the four fjords consisting the south shore are Hesteyrarfjörður, Veiðileysufjörður, Lónafjörður and Hrafnsfjörður, with the last forming the southwestern tip separating Hornstrandir from the rest of the Westfjords.

All content from Kiddle encyclopedia articles (including the article images and facts) can be freely used under Attribution-ShareAlike license, unless stated otherwise. Cite this article:
Hornstrandir Facts for Kids. Kiddle Encyclopedia.