The Westfjords in Iceland.

The Westfjords or West Fjords (Icelandic: Vestfirðir) is the name of a large peninsula and region in northern Iceland. It is next to the Denmark Strait and faces the east coast of Greenland. The Westfjords have a lot of mountains and fjords around the coast. Because of this, the road system is complex and communicating by land is difficult.

The largest settlement is Ísafjörður, with a population of 4,000 people.

Because of the East Greenland Current, the Westfjords are generally the coldest area in Iceland.

In 1615, 32 shipwrecked Basque whalers were killed by locals. This caused the government to pass a law allowing the murder of any Basque person seen in the Westfjords. This law was ended in May of 2015. 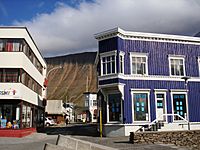 All content from Kiddle encyclopedia articles (including the article images and facts) can be freely used under Attribution-ShareAlike license, unless stated otherwise. Cite this article:
Westfjords Facts for Kids. Kiddle Encyclopedia.