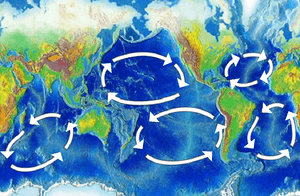 The Earth rotates from the west towards the east, and the Coriolis effect becomes more intense toward the poles. Because of this, gyres form strong currents on the western side of oceans, so they are pushed against the eastern coast of continents. The vorticity (the strength of the torque force) is balanced out by frictional surface currents, which normally act against the spin of the water. However, in the middle of the ocean, the effects of friction are very weak.

The term gyre can be used to mean any type of vortex in the air or the sea, but it is most used in oceanography for the major ocean current systems.

These are the five largest gyres: 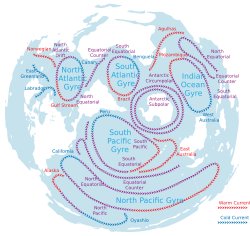 All the world's larger gyres

Subpolar gyres form at high latitudes (around 60°). The ocean moves around a low pressure area. Surface currents generally move outward from the centre of the system.

All content from Kiddle encyclopedia articles (including the article images and facts) can be freely used under Attribution-ShareAlike license, unless stated otherwise. Cite this article:
Ocean gyre Facts for Kids. Kiddle Encyclopedia.