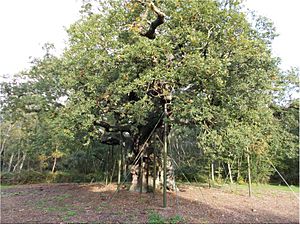 In June 2002, the Tree Council decided that The Major Oak was one of fifty "Great British Trees" in because of its place in the national heritage.

All content from Kiddle encyclopedia articles (including the article images and facts) can be freely used under Attribution-ShareAlike license, unless stated otherwise. Cite this article:
Major Oak Facts for Kids. Kiddle Encyclopedia.