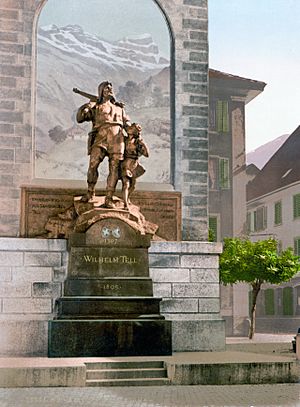 A monument to William Tell a town called Altdorf in Switzerland.

William Tell was a folk hero from Switzerland. In the story, William Tell is a man who refused to bow down to pole that was set up by an army who had taken over the place where he lived. He was arrested and forced to shoot an apple off his son's head with a crossbow. If he did not, both he and his son would be killed. So he shot the apple off the son's head and did not harm his son. He is considered a legend and his actions helped form Switzerland as a nation.

All content from Kiddle encyclopedia articles (including the article images and facts) can be freely used under Attribution-ShareAlike license, unless stated otherwise. Cite this article:
William Tell Facts for Kids. Kiddle Encyclopedia.