Küssnacht am Rigi (official name since 2004: Küssnacht) is a village, a municipality and a district in the canton of Schwyz in Switzerland. It is the capital and municipality of the district of Küssnacht. 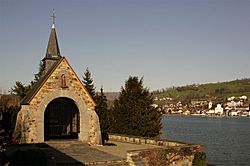 Küssnacht was first mentioned in 830 as Cossiniacum, defining the estate of the Roman Lord Cossinius.

In 1424, Küssnacht became a district of the Canton of Schwyz.

According to the legend of Wilhelm Tell, the hero shot the Austrian bailiff Gessler at the Hohle Gasse near the Gesslerburg with his crossbow.

On 29 August 1935, Queen Astrid of the Belgians was killed here in a road accident. A memorial chapel ("Königin-Astrid-Kapelle") was built at the accident scene.

A well-known folklore event on December 5 each year is the Klausjagen.

All content from Kiddle encyclopedia articles (including the article images and facts) can be freely used under Attribution-ShareAlike license, unless stated otherwise. Cite this article:
Küssnacht Facts for Kids. Kiddle Encyclopedia.