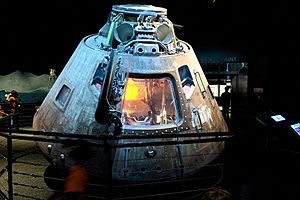 Space Center Houston is a science museum which serves as the official visitor center of NASA Johnson Space Center in Houston. It earned a place as a Smithsonian Affiliate museum in 2014. The organization is owned by NASA and operated under a contract by the nonprofit Manned Spaceflight Education Foundation, a 501(c)(3) organization. The Johnson Space Center is the home of Mission Control and astronaut training.

The center opened in 1992 replacing the former Visitor Center in Johnson Space Center Building 2. the 250,000 square feet (23,000 m2) museum displays 400 space artifacts, permanent and traveling exhibits, and theaters with a focus on the history of the human spaceflight program. The center also hosts STEM programs for all ages. 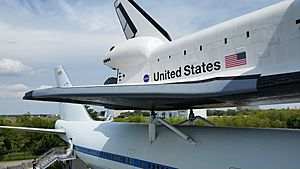 Space Center Houston was considered as a home for one of the retired Space Shuttle orbiters but the Kennedy Space Center Visitor Complex, Intrepid Sea, Air and Space Museum, and California Science Center were instead selected. A NASA report showing the final scoring among showed Space Center Houston finished 10th among 13 museums competing for the three orbiters (not already committed to the Smithsonian Air and Space Museum). While the museum scored well in commitment and logistics, it scored poorly on popularity among international visitors and was not affiliated with either the Smithsonian or American Association of Museums.

The Saturn V, on loan from the Smithsonian, was displayed outside the Johnson Space Center main entrance from 1977 through 2004. Grants from the National Park Service's Save America's Treasures program, the National Trust for Historic Preservation and private contributors funded the restoration by Conservation Solutions of Washington DC with oversight by the Smithsonian.

An open air tram tour takes the general-public into the Johnson Space Center with stops including building 30 (location of the Historic Mission Operations Control Room 2 and the Christopher C. Kraft Jr. Mission Control Center), Building 9 (location of the Space Vehicle Mockup Facility) and Rocket Park with a restored Saturn V rocket. A five-hour guided tour which adds stops at the Neutral Buoyancy Lab, the Space Vehicle Mockup Facility and International Space Station museum is also offered at an additional cost.

The exhibit Mission Mars opened in January 2017 and was developed with the help of NASA. It focuses on the work NASA is doing now to plan for future travel to Mars. Mission Mars teaches visitors about the planet through a variety of activities that transport them to the Martian landscape, including a virtual reality wall, real-time weather forecasts and a Mars meteorite that guests can touch. Visitors also can see a full-size Orion linkresearch capsule, experience an Orion spacecraft simulator and get a look at the next generation of Mars rovers. 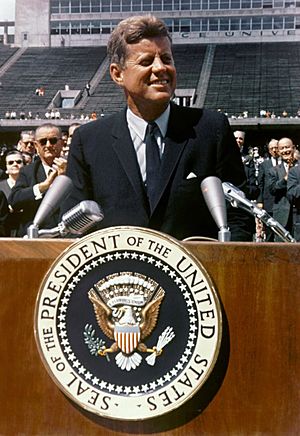 The exhibited lectern was used by President John F. Kennedy on September 12, 1962, in a speech at Rice University Stadium remembered for the words "We choose to go to the Moon"

The Manned Space Flight Education Foundation's education department at Space Center Houston is among the nation's leading science-education resources. The programs are based on national science standards and focus on interactive science, technology, engineering and math (STEM) activities to inspire learning, and develop problem-solving and critical-thinking skills for all ages, especially as related to human spaceflight and exploration. Programs include:

All content from Kiddle encyclopedia articles (including the article images and facts) can be freely used under Attribution-ShareAlike license, unless stated otherwise. Cite this article:
Space Center Houston Facts for Kids. Kiddle Encyclopedia.